This Week In Vexillology #256

April 14, 2018
I really wanted to find the clip from that episode of The West Wing where White House Counsel Oliver Babish reveals he was planning on taking a vacation to Sarawak and the President promptly responds, 'Asia's best kept secret.' (It's Season 2, Episode 19 'Bad Moon Rising' if you want to watch it for yourselves. Just sort of imagine it instead of this paragraph, okay.)

So, as you might have guessed that This Week in Vexillology, I went back to the source of my flag obsession for inspiration and we're going to take a look at the flag of the Malaysian State of Sarawak. Before we get to the flag, we should probably ask the obvious question: where the heck is it?

Sarawak is situated on the northern chunk of the Island of Borneo- it's the red part. That little grey divot in it right at the top next to the white chunk of land is Brunei. The white chunk of land at the top of Borneo is the Malaysian state of Sabah. It's got an interesting history. From 1841 to 1946 it was governed by the White Rajahs- descendants of a British soldier and adventurer Sir James Brooke, who founded the Kingdom of Sarawak. After World War II, it became a British Crown Colony until 1963 when it became one of the founding members of the Federation of Malaysia.

From 1963 on, it's flag had an interesting evolution. It started out with this: 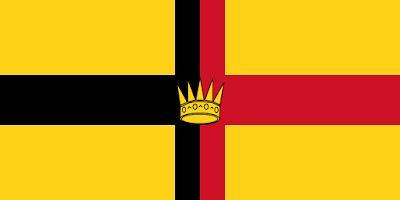 This flag was the flag of the Old Kingdom of Sarawak from 1870-1946 and was brought back upon the foundation of Malaysia. The central portion of the flag (both sides of the cross and the crown in the middle) were kept as a shield in the usual British blue ensign for the flag of the Crown Colony. In 1973, they decided to update the flag to this: 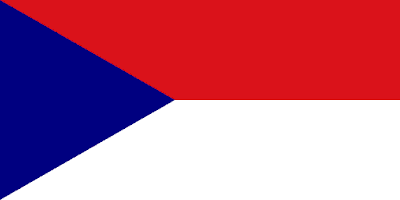 This was called the Triskati and remained the state flag of Sarawak from 1988-1973. It's actually got some symbolism behind it, as the blue triangle represents the unity among the people of Sarawak, red stands for courage and perseverance and white for honesty and purity. But after the end of the Cold War, problems started to emerge, because it bore a passing resemblance to the flag of the Czech Republic.  For the 25th Anniversary of it's independence with the Federation, they adopted their current flag: 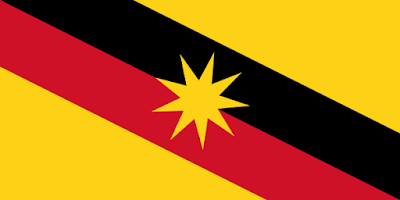 Going back to the same colors as the old Kingdom, the new flag retained many aspects of it's original symbolism but made some important changes to bring it into the modern era. The cross has been replaced with a diagonal band of red and black, which removes any overt references to Christianity. Weirdly, as of 2010 Christianity is the largest religion in the state (42.6%) with Islam just behind (32.2%). The state itself has no official religion, but the Federation does: it's Islam. So I have to wonder if the change was more a national political move than a local one, but who knows. The crown was also replaced with a nine pointed star- this was to remove any references to a sovereign monarchy.

And that's the flag of Asia's best kept secret! Remember, until next time, keep your flags flying- FREAK or otherwise!