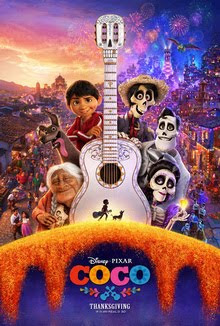 The Elder Spawn had been requesting to see this for awhile and to be honest, both the Missus and I were game for seeing it as well. We were talking about possibly going to see it in the theaters last fall, but we never managed to get that set up, so when I discovered that the Grandparents had it on blu-ray in their extensive collection downstairs, I snagged it and we gave it a watch. Spoiler Alert: it's a Pixar movie, so as per usual, they don't miss a beat.

In the town of Santa Cecilia, Mexico, Imelda Rivera was a wife of a musician who left her and their 3 year old daughter Coco to pursue his dream of fame in the world of music. He never returned, abandoning the family, so Imelda banished all music from her life and opened a shoe-making business instead.

Nearly a century later, her great-great grandson Miguel is 12 years old and lives with Coco and his extended family. In secret, he dreams of becoming a musician like Ernesto de la Cruz, a famous musician from his great grandmother Coco's generation. One day, shortly before the day of the day, Miguel knocks the picture frame holding a photo of Coco with her parents off of the family ofrenda and, removing the photograph, discovers that his great-great grandfather (who's face, is, of course, torn out) is holding Ernesto's guitar. Assuming that Ernesto de la Cruz is his great-great grandfather, he decides to enter the local talent show for the dya of the Dead. He enters Ernesto's mausoleum and takes the guitar to use in the show, only to discover he has become invisible to everyone in the village.

Realizing that he has been cursed for stealing from the dead, Miguel and his dog Dante travel across the marigold bridge to the Land of the Dead to figure out what they have to do get home. Turns out, because he took his Great Grandmother Imelda's picture off of the ofrenda, she can't go visit the family for the Day of the Dead- and, since Miguel needs a blessing from a family member to return home, she agrees to give Miguel her blessing, but only if he gives up his musical dreams.

Refusing to do so, Miguel runs away in search of Ernesto de la Cruz, intending to get his blessing instead. Along the way, he meets a down on his luck skeleton named Hector, who is desperate to try and get back to his family and agrees to help Miguel if he will take his photo back to the land of the living before his daughter forgets him and he disappears entirely.

When Hector realizes that Miguel has relatives and that he can go back whenever he wants, he attempts to return Miguel to them, but Miguel runs away and infiltrates Ernesto's mansion instead, learning the truth: Ernesto murdered Hector when Hector was ready to return to his family and passed Hector's songs off as his own- which means that Hector is actually Miguel's great-grandfather. Eventually, Miguel escapes from Ernesto and together with his family gets the required blessing to head back to the land of the living, where he plays some of Hector's songs for Coco, which helps revitalize her memory of him and Hector's true legacy is revealed and Miguel gets to fulfill his musical dreams.

Overall: Look, it's a Pixar movie. It's beautiful, the music is incredible, it's a gorgeous celebration of family, love and the traditions and culture of Mexico. It tugs at your heart strings (and yes, I'm man enough to admit that 'Remember Me' got me a little misty eyed. Okay, a lot misty-eyed damn it) and is more than up to their usual standards of excellence. As with all kid movies, my standard of 'is it good' is a simple one: does it entertain your kids and you? In Coco's case, the answer is a resounding yes. My Grade: **** out of ****