This Week In Vexillology #255

April 07, 2018
Inspiration is sort of at a low ebb this week, so we're dipping back into the Lost Archives of the Unfortunate Wordpress Experiment and heading back over to Africa to take a look at the flag of Niger: 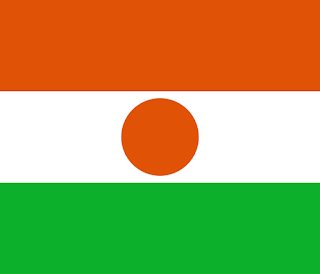 Before we start unpacking this flag, I suppose we should start with the obvious question: what's the deal with Niger? I mean, apart from a tangential involvement in some shady yellow cake deals over uranium that Bush The Younger's administration trumpeted as proof positive we needed to invade Iraq, it's not a country that's in the news a lot. (Granted, we live in America and you could probably say that about most countries in Africa. When you're busy turning local news into a right-wing propaganda outfit or just being terrible at your jobs, the media doesn't have a lot of room left over for solid international coverage of places like Africa.)

So, let's start with the basics. Where the heck is it?

Well, find Nigeria on your globe/Google Maps/Mapquest/atlas, etc and directly to the north of it, voila, you have Niger. (In my head, I always think of the pair of them as being the Victor/Victoria of countries. You know... Niger/Nigeria) As I'm writing this, Google is advised me that it's 3:45 PM and 107 degrees with 'widespread dusty.' So it's hot as balls and dusty as all giddyup at the moment.

From 1900-1958, Niger was run by the French as a colony- but instead of rehashing all the usual European colonial stuff, I actually kind of did a deep dive and tried to figure out what was going on in Niger before the Europeans showed up and it's actually kind of a hard question to answer. Part of that is down to my own general ignorance about pre-colonial Africa (something that I really should remedy, because there's a lot of history there that I don't have a clue about) but part of it seems to be because the question is genuinely hard to answer.

Niger seems to have been at the crossroads of a lot of historical empires. The Songhai Empire and the Mali Empire seemed to have covered portions of the country at points throughout the centuries, while a series of Hausa Kingdoms and the Kanem-Bornu Empire seem to be the immediate predecessors to European colonization.

Post-independence in 1958, things haven't been the greatest for Niger. Periodic drought, desertification and 80% of it's land being in the Sahara have pushed a lot of the population to the far south and west of the country. It's gone through five constitutions, four military regimes and seven republics so far. (I'm getting this from The Font of All Knowledge that is Wikipedia, so hopefully it's a little out of date, because it paints a rough picture.)

All of which brings us back around to the flag. Despite the turnover in governments over the decades, it's actually remained unchanged since independence more or less. It was adopted on November 23rd, 1959 and, like a lot of French Colonies it adopted a tricolor, albeit a horizontal one, in a nod to it's former French rulers.

There's not an official definition of the colors and symbolism of the flag, but a common interpretation seems to be that the orange represents the Sahara (or the Sahel, depending on who you talk to), the white stands for purity (or the River Niger) and the green stands for hope and the fertile regions of the south of the country. The orange circle stands for the sun (or independence.)

The ratio is pretty unusual, as the flag appears to be more of a square than a rectangle, but the flag's wikipedia page also noes that the significance of this shape is unknown and it's not used consistently by the Nigerien government across their print/media.

And that, folks, is the flag of Niger.  Remember, until next time, keep your flags flying- FREAK or otherwise!