Bookshot #107: The Bad-Ass Librarians of Timbuktu 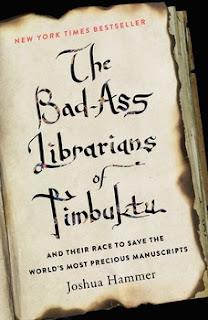 The world today is grappling with the threat of terrorism on a global scale while never before, and while the human cost is horrifying enough, the damage to world history and culture can be almost as hard to watch. From the Buddhas of Bamiyan to the ruins of Palmyra the damage to the cultural heritage of the world incurred by terrorism has been high- so it's nice to read a book about ordinary people finding away to preserve and protect their cultural heritage from those that were seeking to destroy it.

The Bad-Ass Librarians of Timbuktu tells that story. It begins in the 1980s, when a young man by the name of Abdel Kader Haidara began an effort to collect ancient manuscripts in and around Timbuktu (and really, all over Mali) to help preserve them in a government library. Many of these manuscripts had been passed down from generation to generation and were kept in trunks locked away in houses, basements and other dwellings. Timbuktu had been a center for learning, culture and especially Islam for centuries and Haidara wanted to preserve it's history for future generations to come.

The first part of the book is, in many ways the most interesting part. Author Joshua Hammer gives the reader a brief history of Timbuktu and it's place in North Africa- so if you're not familiar with the history of the area (and let's face it, most people won't be) it sets the stage and tells you why Timbuktu and these manuscripts are so important to the region- the sheer amount of knowledge that stretches back centuries is incredible. The work that Haidara had to do to overcome people's natural suspicion that he just wanted to take the books and sell them to some foreigners who would take them away from Mali was considerable, but ultimately successful.

By the end of the 90s and heading into the 2000s, Haidara seemed to have a good thing going. He had a library. He had conservationists. He was preserving a lot of books and manuscripts that were in bad condition. Timbuktu was finding its way back into the world, with the beginning of the Festival au Desert, which celebrated traditional Tuareg music as well as music from around the world. (Bono and U2 came to perform one year, I seem to remember a Robert Plant live album including a track recorded at this Festival floating around somewhere.)

However, by the end of the decade there were signs of trouble. Algeria was convulsed by Civil War. The Arab Spring roiled the region. Qaddafi was toppled in Libya. A dangerous vacuum emerged in the region and into it stepped an alliance of secular Tuareg rebels looking to set up their own state and the local offshoot of Al-Qaeda. Soon they were sweeping across the north of Mali and took Timbuktu, sending the national army into retreat and threatening the stability of the entire country. Soon an uneasy stalemate settled in, with the extremists in control of the north and the government forces hanging on in the south.

That's when this book really takes off, because Haidara read the writing on the wall pretty early when the same offshoot of Al-Qaeda destroyed some Sufi tombs during the fighting in Libya. Sure enough, the secular Tuareg rebels were shoved to one side by Al-Qaeda and Haidara's next mission began. With the aid of international donor money and grants, Haidara set up a network of courier and began a massive smuggling operation to get all 350,000 volumes in the collection out of Timbuktu and south to the relative safety of Bamako- all under the noses of the jihadists in control of the city.

The truly astonishing part of the story: it worked. Haidara's couriers had to bribe their way past government soldiers. They had to talk their way past Islamic morality police. They had to travel by boat and by truck and they did. And so, when France launched a military intervention against the extremists and drove them back into the desert, Al-Qaeda broke into the library- only to find it empty.

Overall: I'm honestly surprised that no one has decided to make this into a movie, because the book certainly reads like it's begging for a movie adaptation. It's quick, informative, thrilling and a beautiful reminder that in a world that seems so bleak a lot of the time sometime the good guys do win and win in a big way. My Grade: **** out of ****