Squawk Box: The Flash/Supergirl/Legends of Tomorrow 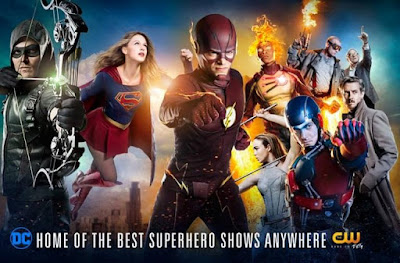 It took me awhile to catch-up on the trio of CW superhero shows that I actually enjoy. (I tried Arrow, but I just... I can't get into it for some reason, so I settled on this trio.) The Flash remains a delight albeit a frustrating one after it's third season. I love the way that Grant Gustin portrays The Flash- he imbues the role with a sense of wonder and delight at what he can do that makes this show- when it's at it's best, a lot of fun to watch.

However, the third season...  oh boy. Despite being told by literally everyone in his life that it was a really, really bad idea to mess with time, what does Barry do to start the season? He goes back in time and saves his Mom, setting up the events of Flashpoint, which dominate the entire season and consist of Barry apologizing a lot for doing the boneheaded thing that everyone told him not to do. There's a big bad speedster in town (Savitar) and Cisco figures out that he's going to kill Iris, so most of the back half of the season is spent figure out how they're going to stop him, which they eventually do- but at an unexpected cost.

On balance, I would say the first third to half of this season was a little annoying. Barry did the dumb thing everyone told him not to do and spent episode after episode apologizing for it. But once everyone gets over that, the fight against Savitar pulls the team together and by the end of the season, The Flash is back on the upswing once more- and in a nice touch, Barry agrees to enter the Speed Force prison to atone for doing the boneheaded thing that everyone told him not to do at the end of the season.

Since there's a plethora of CW superhero shows these days, the inevitable crossovers are a regular event these days- and while some of them work better than others, once nice aspect of the crossover mania is that Grant Gustin (The Flash) and Melissa Benoist (Supergirl) have just about perfect chemistry with each other, which make their crossover episodes with each other a joy to watch, to be honest. They are (as they say in a musical crossover episode that manages to somehow be charming and not cringey) super friends and it's enjoyable.

Benoist brings that same energy and charm to the title role of Supergirl. The first season started on CBS with Calista Flockhart onboard as Kara's boss, the media mogul Cat Grant, but with the move to The CW is Season 2, Flockhart makes an exit as a regular and shows up instead shoe-horned in to the season finale. (More on that later.)

Supergirl starts with the interesting premise: Kara Zor-El is sent to Earth from Krypton as a 13 year old to look after her more famous cousin, but enroute, he pod was knocked off course into the Phantom Zone where it stayed for 24 years, so by the time she arrived, Superman was all grown up. Not needing to teach her cousin anything, the series opens with Kara living a relatively normal life as an assistant to Cat Grant at CatCo media and hiding her powers.

However, when her adoptive sister Alex (Chyler Leigh) is in a plane that's going down, Kara intervenes to save her, revealing her powers in the process and eventually adopted the alias Supergirl. She finds out that when her pod was freed from the Phantom Zone, a prison of her Aunt's, Fort Roz also crashed on earth, bringing hundreds of alien criminals with it including her Aunt Astra and Uncle Non. She spends most of the season rounding up said criminals- finding out that her boss, Hank Henshaw (David Harewood) is actually none other than J'onn Jonzz, the Martian Manhunter and nursing a unrequited crush on James Olson (Mehcad Brooks).

Superman is noticeably absent for the first season, which I think is a wise move. There's an episode where he's sort of dimly seen coming to her Kara's aide (she's sort of in a daze, having had her bell rung by a bad guy especially hard) and other than that, they communicate through texts. It's not until Season 2 that we get a visit from Superman himself. (Tyler Hoechlin).

Season 2 actually gets a little more interesting: the presence of aliens on earth is revealed and many of them are living openly and legally on Earth, which, of course, creates tensions between the 'immigrant' communities and those that don't trust aliens being on Earth. But while that's a season long theme the show plays with, the more interest development centers around the arrival of Mon-El (Chris Wood) who turns out to be a Daxamite Prince who crash landed on Earth. (Interesting side note: I didn't know Krypton had a twin planet named Daxam, so his whole story line is a nice deepening of the overall mythos for me.)

James, who gets bored with being a sideline reporter, suits up and becomes a superhero named Guardian. Kara's sister, Alex, comes out of the closet and gets a girlfriend, Maggie. And of course, the whole love dating thing that Kara has going with Mon-El doesn't end well, because Supergirl can't have nice things, apparently.

All in all, I'll probably keep this in the Netflix rotation. It grew on me over the course of the first two seasons- the character arc for J'onn J'onzz is especially pleasing to me. I don't know how much they're planning to use Calista Flockhart going forward- and if it's 'not a lot' then I'll miss her, but if they do bring her back now and again, it'd be nice if they can figure out a way to do it that's not so... forced. She wasn't bad in the season finale, but I also feel like if you had taken her character out of the episode, it wouldn't have suffered one bit.

Rounding out the CW trio, is, of course, Legends of Tomorrow. Legends of Tomorrow is pure delightful cheese. Like premium Wisconsin cheddar I'm talking here and it remains ridiculously enjoyable and the second season of the show is going strong.

With the Time Masters defeated at the end of Season 1, the team, now headed by White Canary (Caity Lotz) is trying to guard the timeline themselves after the disappearance of Rip Hunter (Arthur Darvill) at the start of the season. However, they're opposed by a Legion of Doom consisting of the Reverse Flash (Eobard Thawne), Damien Darhk (Neal McDonough) and Malcolm Merlyn (John Barrowman) who are after the Spear of Destiny so they can rewrite their fates. The team is joined by new members: Vixen (Maisie Richardson-Sellers) and Steel (Nick Zano), a historian who develops the ability to transform himself into solid steel and is the grandson of Justice Society of America member Captain Steel.

They spend this season chasing down the Legion and racing to get to the Spear of Destiny before they do- stopping in 1920s Chicago, Shogunate Japan, the Apollo 13 mission, World War I- so they can visit JRR Tolkein, of course- as one does, and persuading George Lucas to get back into film making after a very scary encounter with some aliens. (That episode was probably my favorite- this show is so delightfully bananas sometimes.) Eventually, after the usual amounts of derring-do, the Legends win the day and finally just as Mick Rory (Heatwave) is about to get his wish for some beach time Aruba, they crash land in Los Angeles to find dinosaurs roaming the streets instead. Ru-roh, Legends!

Overall, all three of these shows remain delightful. At their best they can be excellent genre television and given the uneven nature of DC's movie universe so far, remain probably their strongest media properties right now. (In a weird way: Marvel makes better movies and DC can make the argument that they do better television in many ways...) In a pinch I'd probably take The Flash over Supergirl, but Supergirl grew on me quite a bit over the course of watch two seasons- and both of these show are helped immensely by their stars. Grant Gustin and Melissa Benoist could not be more perfectly cast as The Flash and Supergirl respectively. Legends of Tomorrow might be the most fun you can have on television right now, if superheroes are your thing. If you're looking for a show to binge on Netflix however, all three are worthy of your time.