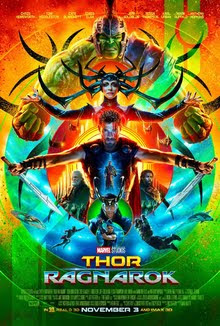 Thor: Ragnarok opens roughly two years after the events of Avengers: Age of Ultron with Thor still searching for the Infinity Stones and trying to figure out what, if anything, is coming- because he's still convinced that something is. Haunted by visions of the climactic final battle of Ragnarok destroying Asgard, he is imprisoned by the fire demon Surtur in Muspelheim. Surtur reveals that Odin is no longer on Asgard and that Ragnarok is coming once Surtur unites his crown with the Eternal Flame that burns in the vault of Asgard. Thor, for his part, defeats Surtur and takes his crown, believing that he has prevented Ragnarok.

Thor returns to Asgard to find his brother Loki posing as Odin. Thor quickly unmasks Loki and forces him to help find Odin, whom Loki left on Earth. Returning to Earth, they find Odin (with an assist from Dr. Strange), but Odin has some bad news: he's dying and his death will allow Thor and Loki's sister, Hela (Cate Blanchett) to escape from the prison she has been sealed in. The fact that they have a sister is sort of news to Thor and Loki, but Odin explains that he had imprisoned her and written her out of history after he feared she had become too ambitious, too eager to conquer all the nine realms.

Odin dies and Hela is released. In short order, she's destroyed Mjolnir, thrown both Loki and Thor off of the Bifrost Bridge, returned to Asgard, killed the Warrior Three and was planning to rule Asgard and conquer the other Nine Realms via the Bifrost, but Heimdall had the good sense to steal the sword that controls the bridge and hides away with the rest of Asgard and it's citizens. Hela, while displeased by this, appoints Skurge (Karl Urban) as her executioner and starts searching for the sword.

Having been thrown out of the Bifrost, Thor crash lands on Sakaar, where is captured, subdued and taken to the Grandmaster (Jeff Goldblum) by 142 (Tessa Thompson) who Thor recognizes as one of the Valkyrior who were killed defending Asgard from Hela long ago. Forced to compete in the Grandmaster's gladiator tournament, Thor is surprised to find himself facing none other than Hulk. Eventually, he convinces Hulk and 142 to go and save Asgard with him and in the process of escaping, they free the other gladiators and start a revolution against the Grandmaster in the process.

They return to Asgard and face down Hela and her forces. Hulk takes on the giant wolf, Fenris, while Thor and 142 fight Hela's army of the dead. The gladiators from Sakaar show up to help evacuate Asgard's civilians, but Thor loses an eye and then receives a vision of Odin which tells him what he has to do. Realizing that Asgard's strength is in it's people, he has Loki unite Surtur's crown with the eternal flame, releasing the demon and unleashing Ragnarok which destroys Asgard and (seemingly) Hela along with it.

His people now homeless, Thor is crowned King and decides to head to Earth.

Overall: Thor is one of the best things about the Marvel Cinematic Universe and this movie was just plain fun from start to finish. It's an absolute delight and draws on the best source material from the original comics. (No kidding: Jason Aronson's run on Thor is one I'm seriously considering collecting along with Walter Simonson's original one. Excellent, excellent comics.) I always love actors that just have fun with the role they're playing and Cate Blanchett looks like she is enjoying herself in every scene she's in. Jeff Goldblum is perfect as The Grandmaster. Tessa Thompson was awesome on Veronica Mars and continues being awesome here. It all works. I have no idea what the plan is for the MCU going forward, but if they want to do another trilogy of Thor movies, I'm down. My Grade: **** out of ****