Showing posts from February, 2022
Show all

Canada, Eh? (Or, Why You Can Care About Two Things At The Same Time)

February 28, 2022
I wrote a post about Ukraine over on the Substack (hey, you should subscribe! ), so I'll try not to tangent too much into that here, but I felt like this was also a post worth writing, because apparently, our national culture war has unhinged people's brains. In an internet full of takes, you're always going to have a consistently high percentage of bad takes on a spectrum ranging from "I disagree with you" but including "Hey, you're wrong" and ending up somewhere in the territory of "This is a batshit insane thing to say." But I think what we have to do, as a nation is to try and move away from the idea that all takes and opinions have to be zero-sum games. You don't have to reflexively disagree with someone else. You can walk and chew gum and the same time. And on the Right, some of the more unhinged takes would have you believe that we shouldn't care about what's happening in Ukraine because what's happening (or, as of th
Post a Comment
Read more

February 18, 2022
Look, I'll be honest: I didn't read the appendices of this book, and the last third or so of this book was a damn chore. There have been plenty of articles out there about the joy of just not finishing a book and how it's good for readers to do that sometimes, but when you're dealing with a book as large and as complicated as Democracy In America, there comes a certain point where you're committed. You've gone too far to quit now and by God, if you're going to keep going, you're going to finish the damn thing once and for all. So, Democracy In America, Part II: Tocqueville continues to surprise with his prescience. It remains a constant throughout the book a comfort because you realize that history may not repeat itself, but it very often rhymes, but also kind of depressing, because nothing has really changed all that much either.  In the early going, Tocqueville meanders a lot on the subject of equality and it's here where he starts to lose his magi
Post a Comment
Read more

It's been a good few years for bringing back the old, primal fears that our age of technological marvels and miracles has conveniently allowed us to forget. So, naturally, just as the pandemic is (hopefully) starting to wind down a wee bit, international geopolitics brings a welcome return of our old friend, World War III, and nuclear armageddon ! I mean, right off the bat, let's quantify some things: do I think whatever is going to happen between Russia and Ukraine will spill over into World War III? No. But there's also an inherent uncertainty with these geopolitical games of brinksmanship that things could go sideways and very easily tip over into a wider conflict that could easily escalate into something worse.  I don't know if Putin is going to invade. It seems counterproductive to me unless they can move fast and break things and get what they want and get out quickly-- I don't think he can afford to get bogged down in a snake pit in Ukraine. I could be wrong
Post a Comment
Read more

Bookshot #150: The Splendid and The Vile 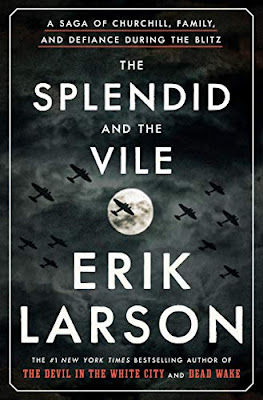 I've read plenty of books about Churchill down the years and managed to get through all twelve volumes of his History of The Second World War. I've got the Roy Jenkins biography lurking around the house that someday I'll sit down and tackle. In short, I've read plenty about Churchill- so I was interested in The Splendid and The Vile , but I was also unsure of how much new territory it was going to tread. After all, this was the subject matter that I had read before. Happily, I had nothing to worry about. Erik Lawson had much the same thought and decided instead to hyper-focus on just the first, perhaps the most critical year of Churchill's Premiership- his first one. It's a fascinating and perhaps a brilliant choice. No other leader in history that I can think of has started his first day on the job with such an ugly set of circumstances. Churchill started his first day as Germany invaded Holland and Belgium and grim news and hammer blow after hammer blow follo
Post a Comment
Read more
More posts