Showing posts from October, 2020
Show all

October 31, 2020
I took a week off, just because- but Part Six marks the end of the Theme Thursday era of this serial, before it transitioned to Serial Saturdays on Reddit. I've super sized all the first six entries to match the 750 word limit on Serial Saturday, so please, enjoy Part Six of Murder In Kinmen: Return The problem with living in Kinmen, Pei-Shan reflected, was that it's past was always closer than you'd think. it had been a week since the meeting with the Chief. The manilla folder he had "accidentally" left on his desk had only confirmed what Pei-Shan had suspected: this homicide was getting closer to something the military wanted to avoid. But it was the cryptic note at the very bottom of the folder that still puzzled her" Go running. Dawn. Shuang Kou. Lieyu. If there was was one thing Pei-Shan hated more than getting up before 9:00 AM, it was running. She loathed running, so, naturally, she made herself go running every afternoon before heading into work. But
Post a Comment
Read more 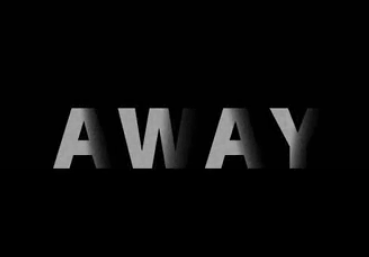 Avatar: The Last Airbender is something I've been waiting to watch for a very long time. It never seemed to be on any streaming services I could find and I didn't grow up with it on television the way a lot of kids did. I heard two consist things about it: a. that it was incredibly good and b. the movie version sucked and while I haven't seen the movie and cannot testify to it's quality, I have now seen the entireity of the series and can cofirm: it's incredibly good. Set in a world where some people can manipulate one of the four elements- water, earth, fire or air using telekinetic martial arts known as bending the series opens with one of the four nations, the Fire Nation in ascendance. They've driven the Airbenders to extinction and pushed the Water Tribes to the North and South Poles of the world. The only ones left the oppose them are the Earth Kingdom and the war is not going well for them. One day though, a couple of members of the Southern Water Tribe,
Post a Comment
Read more

Well, I didn't expect to find it so soon, but I think I've found it: a tiki drink that isn't really my cup of tea- and that's the Jungle Bird. I didn't pull the recipe out of Smuggler's Cove this time, so I can't guarantee that there aren't key differences that might change my opinion on this drink, but I did find a recipe on Liquor.com that seems to be pretty standard across the internet: 1.5 oz dark rum 0.75 oz Campari 0.50 oz Demerara syrup 1.5 oz fresh pineapple juice 0.50 oz fresh lime juice 1. Fill a mixing glass three-quarters with ice, and add all of the ingredients. 2. Shake until chilled for about 30 seconds. 3. Strain into a rocks glass over ice cubes or one large piece of ice and add the garnish. (Which in this case is a pineapple wedge.) Created in 1978 at the Aviary Bar of the Kuala Lumpur Hilton ( which is still there today and getting really good reviews on Tripadvisor, if you happen to be in Malaysia anytime soon .) the Jungle Bird is p
Post a Comment
Read more

October 21, 2020
I've got two degrees in Political Science and up until now they've served as the punchline to the inevitable, "yeah, they look really pretty on my wall" kind of joke people my age make when they're trying to accept the grim economic reality of student loan debt. But Holy Hannah in a Handbasket am I getting tired of bloviating sermonizing from writers who get gigs at publications like The New Republic and then proceed to write the worst kind of drivel imaginable proclaiming that "well, actually [insert platitude/institution that the Establishment/Elite Progressives hate] is the real problem." Case in point: The Constitution Is The Crisis . Just the title alone is enough to raise my blood pressure, but it only goes downhill from there. It should be noted that if this article had appeared in say, I don't know, the Federalist or the National Review or the Wall Street Journal it would have been absolutely excoriated as "advocating for fascism"
Post a Comment
Read more

October 17, 2020
It's Saturday and that means it's time for another installment of my ongoing serial, Murder In Kinmen ... please enjoy:  Whodunit? "Wait." Pei-Shan paused at the foot of the main stairs. "Let's-" she turned on her heel. "Let's make a stop real quick." "Where?" "Dispatch." She led Wei-Ting down the longh allway where an imposing metal door greeted them. Next to it was a keypad and a buzzer, which Pei-Shan pressed. "Yes?" The voice sounded old and gravelly, as if smoking a pack a dayof cigarettes and gargling with kaoliang every morning was a healthy thing to do. "It's me," Pei-Shan said. There was a long pause before the metal door gave a distinct thunk and Pei_Shan opened the door. Wei-Ting stepped in behind her. Four of the five dispatchers were busy at work, but the dispatcher at the main console turned to greet them. "Detective," she said. "Huijun! Have I ever told you you're
Post a Comment
Read more

October 15, 2020
I could give a shit about what the New York Post actually wrote .  ( Here's NPR's version of the same story, just for the sake of balance .) The various sins, both real and imagined of Hunter Biden rank pretty low on the list of things I care about. But what should concern you- and certainly concerns me is that Facebook and Twitter went to such lengths to squash the article, to begin with. And maybe some of this is due to the fact that I watched both The Great Hack and The Social Dilemma on Netflix recently, so I will concede that perhaps I'm a little more paranoid about this than I was last week- but it's not paranoia if they're actually coming to get you. Most of the Liberal/Prog Commentariat on Twitter is okay with this. After all, it's speech they don't like and Orange Man Bad after all- but you've got to look beyond the now for half a second. If this was a Vox article or a Washington Post article or a NY Times article, the Liberal/Prog Commentaria
Post a Comment
Read more

October 10, 2020
Very happy to present part four of my ongoing serial Murder In Kinmen ...  hope you enjoy: Despair "We've got nothing." Pei-Shan leaned back in the chair, rubbing her eyes. "We've been at this for six hours." She shook her head, fighting off a growing sense of despair. "Damn. First homicide we've had in years and it's like we've hit a brick wall." "Maybe we should-" Wei-Ting hesitated. "Do what?" Pei-Shan asked. "Go over all this footage again? There's no sign of movement from the Mainland at all." "I've been checking internet forums, the dark web, the news from over there and there's nothing," Wei-Ting said. "Not even so much as a police report. Even the local underground types in Xiamen haven't heard anything." "The local underground types?" Pei-Shan arched an eyebrow. Wei-Ting flushed. "Not like dissidents or anything," he said hurriedly. "But,
Post a Comment
Read more

The Red Pills Cut Both Ways

October 08, 2020
So, 'red pilling' is a term that is getting thrown around a lot this year. The media's been red-pilling people by standing in front of four-alarm structure fires and insisting that "the protests are mostly peaceful", the public health community and politicians have been doing it too: "Shut down your life. Don't protest that, protest this. You can't go to church, but you can march in this protest which meets with our approval." "No need for a mask," they said in March when they were worried about a PPE shortage, "but for sure wear a mask now." The overall feeling in the commentariat seems to be that these obvious double standards- whether you agree with them or not, are pissing off people- not people that are plugged into the commentariat and social media more than they should be- but the general mass populace of America that's just struggling to keep their head above water and desperately wanting this pandemic to be over a
Post a Comment
Read more 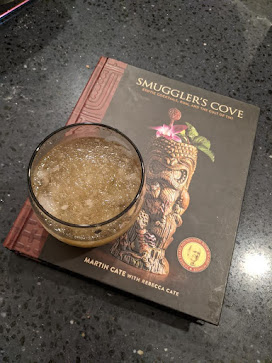 I was looking for Dry Curacao*. Smuggler's Cove has a mai-tai recipe that calls for it and I had seen a bottle at the local liquor store, but when I went back to get it- do you think it was there? Of course not-- but there was a bottle of falernum on the shelf and recognizing that it was one of the "what the hell is that?" ingredients in Smuggler's Cove, I snagged a bottle and started to play around with it. One of the first drinks I stumbled across that calls for it is Corn and Oil. The name endeared it to me: if there's a decent tiki bar in Iowa (a matter I need to investigate further) that doesn't have this on the menu they need to add it! (You could even call it 'Ethanol', which would be even more perfect.) Hailing from Barbados, the recipe is dead simple: 1/2 oz John D. Taylor's Velvet Falernum 2 oz blended aged rum (Barbados rum preferred) 2-4 dashes of Angostura bitters Add all the ingredients to an old-fashioned glass and fill with crushed
Post a Comment
Read more

October 03, 2020
Not really much to add about this part--  it's Part Three of Murder In Kinmen , 'Secrets': Wei-Ting was sitting in the back of roll call, trying not to yawn. He hadn't slept all that well the night before. Turns out, Pei-Shan had been right. Every time he closed his eyes, all he could see was the body on the beach, staring sightlessly up at the sky. He had been awake for hours, evaluating his feelings, trying in his head to make sure that he was handling his first murder in a healthy way. The Academy had talked a lot about mental health and given everything he had gone through to get here to begin with, Wei-Ting was trying to be extra vigilant about it. "Wei-Ting!" The Lieutenant's voice brought him back to the present. "Yes, L.t.?" "You hear your assignment?" "No, L.t." The Lieutenant scowled at him. "Fine, once more for the people in the back," he said. "Chang, Tseng, you've got Area 2 today- Jinning and
Post a Comment
Read more

Bookshot #135: Cromwell, Our Chief of Men 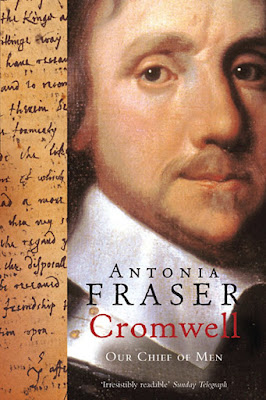 I've long been fascinated with the English Civil War- I'm not sure where that started, but a possible summer vacation spent in the Cotswolds, combined with a youthful adminration for the fashions of the Cavaliers especially is probably what started it at all. But the English Civil War wasn't the neat and tidy conflict that it's American counterpart was--- quite the contrary it was messy, so when I decided I wanted to learn more about it, I picked up two biographies (again, on another UK trip)- one on Charles II and the other on Oliver Cromwell, both written by Antonia Fraser. Having read both, I'm still not sure I know it as well as I know the American Civil War, but I do have a greater understanding of the conflict and that is thanks in large part to the immense tomes on the two men diametrically opposed to each other throughout: Charles II and Cromwell. Now, I've already read Charles II's biography, so I tucked into this one (I think this was the second or
Post a Comment
Read more
More posts