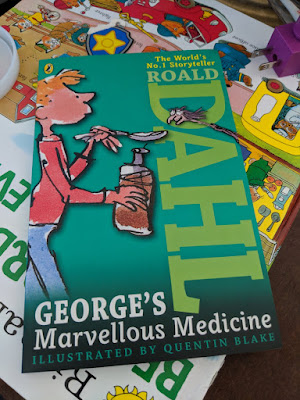 The Elder Spawn and I are continuing to make our way through the collected works of Roald Dahl. We've gone through both Charlie and The Chocolate Factory and Charlie and The Great Glass Elevator. We've hit up some works of his that I wasn't as familiar with: The Giraffe, The Pelly and Me and Esio Trot (which the Beeb did a film adaptation of with some serious star power- Dustin Hoffman and Judi Dench- which kind of shocked me, because it's a short short book, but they managed it.)

Then we got to George's Marvelous Medicine.

Y'all. We should probably talk about this book a little bit. In a world where even Peter Rabbit can cause people to lose their damn minds, I will be shocked indeed if we ever seen so much as a television adaptation of George's Marvelous Medicine. It is, in the parlance of our contemporary vocabulary, somewhat problematic.

The kicker is, if you check out the wikipage for the book, it wasn't intended as such. Instead, it was a tribute to the hard work of the medical profession.


Being a medical expert was one of what Dahl called his "dreams of glory: he had huge respect for doctors and particularly those who pioneered new treatments. He dedicated the book to 'doctors everywhere.'

Given that little bit of knowledge, the book looks a hell of a lot different. Reading it, I was sort of raising my eyebrows internally as I read it. It starts nicely enough. George is left home alone with his Grandma while his parents are out running errands. She needs her medicine every day at 11am and George, tired of her being a nasty old woman decided to brew up his own medicine hoping that it'll make her into a nicer person.

Then, George starts to brew his medicine. (This is where it gets dubious.) He goes around the house and starts to collect ingredients, which include: deodorant, shampoo, floor polish, horseradish, gun, engine oil, anti-freeze and a lot of other ingredients too numerous to mention. At this point, I'm thinking: "Holy shit, he's going to straight up murder his Grandma." and "This book must give people who work at Poison Control nightmares." (Roald Dahl taking a sharp left turn into some seriously messed up darkness, y'all.)

George does some kind of weird trance like incantation and the medicine gets magical and therefore not poisonous though, but he figures out real quick that his medicine has some unusual side effects. His Grandma grows as tall as the house, busting through the roof. Her personality, however, remains as charming as ever. George's parents are less than thrilled to return home to this situation, but his Dad is all about making the farm animals bigger so they can get more meat, eggs, etc to sell.

Grandma, however, is still in the house and wants out and reluctantly, Dad gets a crane to remove her and tries to recreate George's medicine so they can have ALL THE GIANT ANIMALS, but instead, they end up creating a medicine that does the opposite and shrinks the animals. Grandma (who is still a crab-ass) is tired of sleeping in the barn and being gigantic, starts yelling about it and grabs the shrinky medicine and downs it. She then shrinks down to nothing and disappears.

George is horrified. His Mom is upset. His Dad is happy, because she was a crab-ass. And finally Mom even admits that her own Mother was a crab-ass and is all like 'NBD'. And that's the end of the book...

So: George makes a horrific poisonous concoction of literally every single household item that has a warning label on it and it doesn't kill his Grandma and when he tries to reproduce it, it shrinks her into nothingness, essentially killing her. And everyone is okay with that.

In all fairness to Dahl, there is a disclaimer warning at the start of the book telling kids in no uncertain terms to 'Not try this at home' but...  man, that ending is dark. Dark in a way that I forgot children's books could be sometimes. That's not to say it's a book to be avoided, by any stretch of the imagination. It's just...  questionable is all. The Elder Spawn and I will have done the complete works of Roald Dahl before long and this is the first book of his that's made me sort of pause.