Showing posts from September, 2021
Show all

September 25, 2021
Still a little unsteady on her feet, Sarah pulled herself upright and looked along the maintenance walkway. As she had predicted: quiet. Ema arrived next. Kamara and Mendrika grabbed her and helped her over the railing. She nodded thanks to them and collected herself for a moment before: “Which way?” “Elevators are that way,” Sarah pointed down the walkway.  “No other way up?” Ema asked. Sarah shook her head.  “Let’s go check it out,” Kamara suggested. “I might be able to make some magic happen.” “All right,” Ema pointed to the far end of the walkway. “Alan, Mendrika, watch our back. Sarah, you lead.” Sarah nodded and slipped past Ema and strode down the walkway to the elevator. “Don’t touch anything,” Kamara called from behind her. “Let me look at it first.” Sarah stepped aside and let Kamara squeeze by her. He glanced at the elevator and then tapped on a panel above the call button. He grinned and reached into his protective gear and pulled out a small screwdriver. “You contracted wi
Post a Comment
Read more

September 18, 2021
The Enugu was quiet. Perched in a particularly thick cloud, just outside the scanning range of New Toliara, they were rigged for silent running and everyone was speaking in hushed tones. “So, there’s been nothing?” Harcourt looked unhappy. “No,” Kamara replied. “The city itself is there. There’s just… no communication. No nothing. Not even local channels or frequencies appear to be operating.” “Has their dome been compromised?” Sarah asked. “If everyone was forced into shelters and they’re running on emergency power that could-” but Kamara was already shaking his head. “The Dome is still up over the city.” “I don’t like this,” Ema frowned. “It feels-” “Like a trap,” Harcourt finished. Ema nodded in agreement. “I still say we should just do a frontal approach. Make like we’re docking,” Mendrika put in. “And if the city is controlled by the enemy?” Ema asked. “What then? We’d be sitting ducks, especially with the way the docks are laid out here.” She leaned forward and poked Harcourt on
Post a Comment
Read more 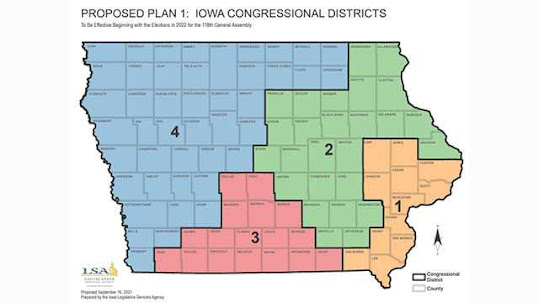 1. Look At This Pretty Map : Iowa Redistricting Begins So, the non-partisan agency tasked with making the maps dropped their first proposal last night and the loose consensus seems to be that this map probably won't be the map. Maps are also included for State House and Senate districts, but I haven't done a deep dive on those yet, and honestly, if this plan gets shot down, it may be less about the Congressional lines and more about the State House and Senate Lines-- but I gotta say, if I was just going purely on congressional districts, there's a lot to like about this map.  (Coverage this morning seems to cast doubt on this map because it puts "rising GOP Star Ashley Hinson" at risk. God. Gag me with a spoon if that description is actually true-- what it does put at risk though is the Battle of the Former KCRG TV-9 Anchors, which I was looking forward to as Christina Bohannon has thrown in for the current 2nd District primary, but would get bumped over to the 1s
Post a Comment
Read more

Serial Saturday #2.19: One of These Things Is Not Like The Other

September 11, 2021
There was a moment of tense silence in the med bay, as Mendrika stared at the image, expressionless before finally, he sighed. “I had hoped you would never find out about this, Sarah.” “You knew ?” “I did,” Mendrika held up his hand. “But it’s not him. It’s some Armscor trick, some Consolidation nonsense.” “How long?” Sarah snapped. “How long have you known?” “Does it matter?”  “It does matter!” Sarah shouted, startling everyone. “A man is running around out there in the Universe with my dead father’s face and you don’t think it matters ? You don’t think I should have been told ?” “I-” The words caught in Mendrika’s throat.  Sarah kept going, the pent-up rage inside her finally bursting free.. “I’m an unwitting pawn in some kind of corporate espionage and they want me to control my city and put neural mind control in my head so I’m their damn puppet and then you show up like a damn ghost and the next thing I know I’m running all over Venus and you just failed to drop into the con
Post a Comment
Read more
More posts