Showing posts from December, 2021
Show all

December 31, 2021
Given the times we live in, the idea of New Year's Resolutions seems idiotic, but I'm doing it anyway because lists are easy to make and strangely satisfying to cross things off of. But before I launch on yet another exercise in mild futility (I do usually get some of these things accomplished), it's time to look back on 2021 and see how I did. 1. End the year under 200 lbs Nope, but it's coming with me for 2022. 2. Get another tattoo (I've known what I want to get for a while, I just need to do it.) Nope. Not yet- but it's coming along for 2022. 3. I want to complete a 200 day Duolingo Streak  I got to 141 days before I fell off the wagon, but I've picked it back up again and I'm pushing 50 days as of this writing. 4. New deck! We got rid of (most of) the old deck this year, but in 2021 I want to finish out the project and get a shiny new one. Success! We did get a new deck done. 5. My Goodreads goal for 2020 was 40 books and I came up short by just a
Post a Comment
Read more

So, I have three seasons of Babylon Five and a collection of the movies on DVD. It used to be on Netflix for a long time and I kept desperately hoping that it would show up on streaming somewhere else, but it never did until HBO Max came along. Naturally, once we hopped on that train and I found out that they had not only all five seasons but a remastered version of all five seasons I had to hop on that binge-train and check it out. First of all: massive props to HBO Max and WB for cleaning this up. It looks awesome... it even starts with 'The Gathering' (the backdoor pilot/movie that preceded the show by about a year or so, I think) before plunging into the first season and going from there.  Second: it would have been nice to have some of the movies included on streaming too- but given the transition to TNT after the end of the fourth season, there might be some rights issues there as well. (I have no idea how any of that works and maybe that's the reason, maybe it'
Post a Comment
Read more 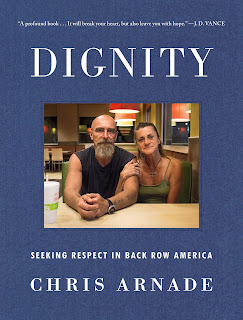 A lot of very rich, allegedly smart people entrenched in our elite classes like to make grand pronouncements about how they "understand" the country. Too many of them treat anything outside of Washington D.C., New York, and Los Angeles as some kind of exotic, dystopian, a foreign country. A lot of them churn out the typical pieces about "working-class voters in the Rust Belt" every four years and leave it at that. The number of writers or journalists that actually attempt to understand what's going on in those parts of the country is vanishingly small. Salena Zito is one . Chris Arnade and his book Dignity: Seeking Respect In Back Row America is another. Arnade left his Wall Street job and ventured into the neighborhood of Hunt's Point in the Bronx and began documenting what he saw there and learning about the lives of the people who lived there. He then headed out across the country- to places like Selma, Alabama, and Cairo, Illinois, Portsmouth, Ohio- al
Post a Comment
Read more
More posts