Showing posts from September, 2022
Show all

I don't know how to say this, so I'm just going to say it: 'Fancy' is the nicest song about turning your daughter into a prostitute that you're ever going to listen to. That's a strange sentence, I know- but even if you go back and listen to the original version of the song by Bobbie Gentry , there's a contradiction that runs through both that version and Reba McEntire's version that's hard to get away from. On the one hand, the lyrics and the story are fucking dark. I mean, a desperate mother saves up all her money to buy her eldest daughter a nice red dancing dress? Mom dies, Baby gets taken by the welfare people and Fancy learns what her Mama was talking about when she said "just be nice to the gentlemen, Fancy, they'll be nice to you." This shit is dark , y'all. And yet... There's a note of undeniable empowerment that runs throughout the song as well- and Bobbie Gentry was pretty blunt about it being a feminist statement:
Post a Comment
Read more

I remain convinced that both Marvel and Star Wars are going to start to reach something of a saturation point in content in the next few years-- there's so much stuff in each universe now that it's almost becoming a chore to keep up with it all and while Star Wars has a slightly different twist on that problem than Marvel does, it was with deep trepidation that I sat down to dig into Ms. Marvel. Moon Knight was just okay. The second Dr. Strange was decent. Wandavision and Loki were kind of interesting, so I didn't know what to expect with Ms. Marvel and happily, I was pleasantly surprised. The old magic isn't completely faded out and Ms. Marvel seemed like a welcome return to form for the quality and general entertainment factor I've come to expect from Marvel shows. (Slight Tangent Here: the character has had four incarnations in the comics and Kamala Khan is the fourth to take the name, Ms. Marvel- in the comics anyway. Of the previous incarnations, Carol Danv
Post a Comment
Read more

September 08, 2022
Well, it's here. I begin my 39th trip around the sun and I wish I could say that I've made decent progress on my list here, but honestly I haven't. Here's where I'm at: #2: I can do it at any time. Just need to make an appointment. #4: Need to train and get my ass in shape, but also possible. #8: Life and work have been busy, but I'm working on Book 4 as fast as I can. Chipping away at that goal. #6: I could do it, but I choose not to . #10: Technically, I'm knocking that off the list this weekend with a nice solo birthday/anniversary trip to Colorado with the Missus. #11: I'll give this until December, but I think we're pretty much there.  #13: Can do this anytime as well...   #16: Jenkins' biography of Churchill is the only one left on this list. In short, I feel somewhat confident that I can get half of this list accomplished in the next year or so. Then I'll have to sit down and think about the next list. 50 Before 50! ~~~ 1. Publish my
Post a Comment
Read more 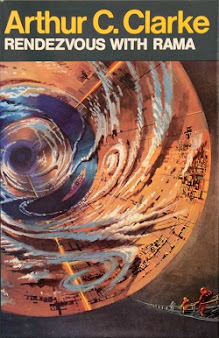 My parents had a couple of the Rama novels floating around when I was a kid and I think I ended up reading one of the subsequent volumes (I want to say The Garden of Rama or Rama Revealed) I don't recall reading any of the other books, however, so when I saw that Denis Villeneuve was planning on following up his excellent adaptation of Dune with an adaptation of Rendezvous With Rama , I figured there was no better time to snag the first novel off Kindle and give it a read. When Earth is struck by an asteroid in 2077 (landing in northeast Italy), the government of Earth sets up the Spaceguard system to make sure humanity has a reliable way to detect potential threats coming from deep space. Fifty-four years later, in the year 2131, Spaceguard picks up an unusual asteroid still outside the orbit of Jupiter and humanity quickly realizes that this one is unusual. For a start, its trajectory clearly indicates it's an interstellar object. But astronomers quickly realize that it is
Post a Comment
Read more
More posts