This Week In Vexillology #253

March 24, 2018
We're continuing our tour of Ireland this week, wrapping up the last of Ireland's four provinces with the flag of Ulster: 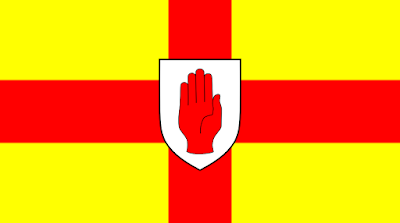 Before we plunge into the meaning of the flag, I think it's important to clear up any potential confusion about the territorial definition of what actually constitutes Ulster. It is the only one of the four provinces to cross international boundaries, with the counties of Antrim, Armagh, Down, Fermanagh, Londonderry and Tyrone falling on the UK side of the border, while the counties of Cavan, Donegal and Monaghan fall on the Irish side of the border. All of which is demonstrated by it's location on the map, shown below: 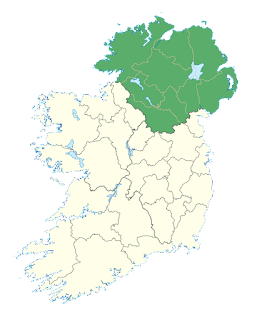 The flag is a composite achievement of the heraldic symbols of two of the best known provincial families. The red hand is derived from the O'Neill dynasty, while the gold background and red cross are taken from the coat of arms of the Burkes, a Hiberno-Norman family.

The Red Hand of Ulster dates back all the way to 1317 when the O'Neill Family gained supremacy of the ancient Ulaid kingship, which they turned into the title King of Ulster. It also became a symbol against the spread of English control during the Nine Year's War (from 1594-1603) A good quote from the time- at least according to the Hand's wiki-page: "The Ancient Red Hand of Ulster, the bloody Red Hand, a terrible cognizance!"

The red and gold cross has been a symbol of the Burkes since 1203, which is a pretty long time- the combining of the red and yellow cross with the red hand of Ulster was the brain child of the 1st Earl of Ulster, Walter de Burgh, all the way back in 13th Century. So the flag of Ulster has been around and kicking for a very long time indeed.

And that wraps up our look at the four provinces of Ireland! Remember, until next time, keep your flags flying, FREAK or otherwise!