This Week In Vexillology #252

March 17, 2018
It seems only appropriate that we somehow find ourselves in the Irish province of Leinster on St. Patrick's Day itself. Why, you ask? Well, its flag is, perhaps, the most obviously Irish of the four provinces of Ireland: 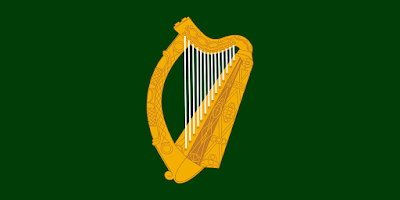 A symbol of Ireland since the 17th Century, the harp on a green field was the flag of Owen Roe O'Neil, who entered the Spanish service in 1601 and rose to prominence, returning to Ireland in 1642 to assist the Irish Confederation. Which brings us to the next obvious question: what the heck is the Irish Confederation? Well, while England was busy having its civil war, the Catholic nobles, clergy and military leaders go together and formed a Confederation and established self-rule while England was busy chopping off the head of Charles the First and being all puritan and Cromwellian about it, they set about setting up a government (which did swear allegiance to Charles the First, but that's neither here nor there) and for eleven years or so, they ran Ireland.

Where Leinster comes into all of this is the location of the Irish Confederation, which based itself in Kilkenny, 'the principal city of Leinster without the Pale.'* And that really is the long and short of how Leinster got it's flag. The current present day province started out as three ancient Irish Kingdoms of Mide, Osraige and Leinser, but after the 12th Century Invasion of the Normans (when the Pale first sort of appeared) and by then Mide and Leinster had sort of merged into one. 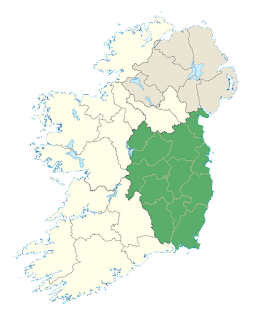 The present day province has a population of 2,630,720 which makes it the most populous province of the four and it's made up of the present day counties of Carlow, Dublin, Kildare, Kilkenny, Laois, Longford, Louth, Meath, Offaly,Westmeath, Wexford and Wicklow. As to where it is in the grand scheme of Ireland, well, it's the green part of the map of Ireland you see to the right of this sentence.

We've done three out of four provinces of Ireland so far, which just leaves Ulster left to go.

In the meantime, keep your flags flying- FREAK or otherwise and make sure you enjoy St. Patrick's Day- but just not too much.

*Next obvious question: what's the Pale? Well, it's an area of Ireland centered around Dublin that was under the direct control of the English Kings and Queens from the late Middle Ages onward. It's also the origin of the expression 'beyond the pale' because the original word 'pale' derives from the Latin 'palus' which means stake- specifically one used to support a fence, the meaning of which sort of moved from a literal fence to more of a settlement boundary once you stepped up in scale, which brings us back around to that expression: 'beyond the pale.'