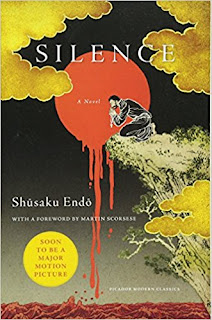 I saw some previews for the movie Silence and read some articles about what a passion project it was for it's director, Martin Scorsese and so I figured, 'man, I should get ahold of this book and read it,' so I did.

In the 17th Century, when news reaches the Church in Portugal that a Jesuit Priest named Ferreira had undergone torture in Nagasaki and renounced his beliefs, the Church decides to send two young Priests, Father Rodrigues and Father Garrpe to research the truth of the matter and minister to the Christians of Japan while they do so. Japan is currently in a period of repression against Christians, so both Priests make the long arduous journey, first to Macao and then to Japan knowing that once in the country, they will be in great danger.

The Priests make landfall and soon find a Christian community in a nearby village. They begin to minister to the faithful, while hiding from occasional sweeps by samurai sent by the local magistrate, Inoue, whose name they have learned to fear as they were told he was a former Christian who was especially vigilant at finding Priests and either executing them or getting them to renounce their faith. The authorities bring a fumie, a carved image of Christ with them and ferret out hidden Christians by getting them to trample on the image. Those that refuse are imprisoned and tortured.

When a pair of local Christians are found and refuse to renounce their faith, they are tied to crude crosses and placed in the tide to freeze or be battered to death by the water- the crosses are placed just high enough that they do not drown. Eventually through a combination of exposure and exhaustion, both are martyred, which shakes the faith of Father Rodrigues especially. Martyrdom, he had believed was a glorious act of faith, replete with nobility and courage. But there was nothing but brutality and cruelty in these deaths and Rodrigues begins to wonder at the silence of God.

The two Priests flee the village, to avoid putting any more of the villagers at risk, but soon Rodrigues is lost and starving and finally, when betrayed by one of the villagers he is captured and forced to watch as Father Garrpe is executed while other Christians are drowned. Captured and imprisoned by the feared Inoue, he learns that initially, the authorities had been torturing Priests in an attempt to get them to renounce their faith. After Father Ferreira had renounced his faith, they changed their tactics and instead tortured the Christians, promising the Priests to end the suffering of their flock if they renounced their faith.

Rodrigues continues to struggle with his faith, even as he meet Ferreira, who tells him that Christianity cannot succeed in Japan and that what he had spent decades building had turned out not to be Christianity, but local beliefs with Christianity painted over them. While Rodrigues continues to understanding suffering for one's faith, he begins to wonder if it is self-centered and egotistical for him not to recant when doing so would ease the suffering of others. God remains silent until the climactic moment, when Rodrigues makes his choice.

Silence is probably the most incredibly written and moving novel of faith I've read since Graham Greene's The Power and The Glory. The climax of the struggle of Father Rodrigues is one of the most powerful pieces of writing I think I've ever read in a long time. This was one of those books that I had to put down, lean back and just sort of think about for a very long time. It sticks with you and books that do that are rare indeed. I loved the structure of the novel as well- using letters written by Rodrigues to tell the story allows the reader a glimpse into the inner personal struggle that he's going through, but the choice to switch toward the end of the book to a journal/diary of a Dutch trader is an interesting one as well. That chapter was a bit jarring, especially since the book switches back to the point of view of Rodrigues after that, but it also gives the reader more of the historical context in which Endo is writing, which I think adds to the power of the novel, knowing that Christianity really did have a period of persecution in Japan.