This Week In Vexillology #251

March 10, 2018
We're continuing our journey through the flags of Ireland this week, heading south from Connacht to take a look at the flag of Munster: 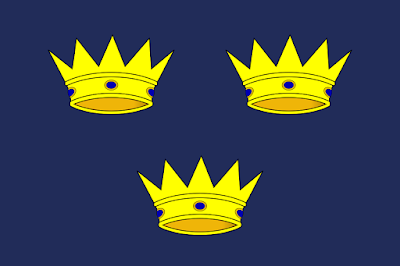 That Kerrygold butter that everyone raves about? Well, it comes from Munster. Weirdly though, the cheese doesn't- which is kind of a bummer, because it would dovetail nicely with the whole 'awesome butter' thing that Kerry has going on. It consists of the counties of Clare, Cork, Kerry, Limerick, Tipperary and Waterford- it's also the home of the Blarney Stone, Skellig Michael of The Last Jedi fame and of course, Jameson Whiskey and Waterford- so you can get the whiskey and the crystal glasses to drink it in. So Munster is apparently where all the fun stuff is. So that brings us back to our most pressing question of all: just where the heck is Munster? Well, our handy-dandy map of Ireland is back and ready to assist us. 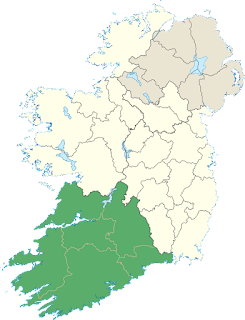 The green part shaded in on the map down there on the southwest chunk of Ireland? That's Munster. (And thinking about it: I've probably flown over Munster at least once. I have a very vivid memory of flying over to the UK in 1992 on Air Canada, no less. We had awesome entertainment options and none of us really slept on the flight, but I remember, when the map finally showed us over Ireland, I peek out of the window and far below in the dim morning light I saw the craggy beginnings of the coast of Ireland and knew we were getting close to our destination.)

So let's get down to brass tacks and take a look at the flag of Munster...  it's a far cry from Connacht with it's bad ass mutant eagle, but the initial glance is pretty damn striking- though in a more understated way than Connacht's. Munster and it's three crowns have been showing up on flags and coats of arms for nearly four hundred years now. The three crowns were also seen on many flags and symbols of Ireland until the harp symbol became prominent on a more national level.

Here's the thing though: no one is quite sure about the meaning of the crowns on the flag- many have theorized that crowns stand for three of the medieval lordships in Munster: the O'Briens, the Butlers and the Fitzgeralds.

And that;s the flag of Munster! Remember, until next time keep your flags flying, FREAK or otherwise!