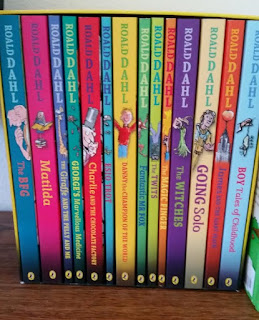 This collection was perhaps the best birthday present the Missus and I have come up with thus far for the Elder Spawn. I'm not sure he'd necessarily agree with us- at least not yet- he's a big fan of his Nintendo DS and playing Mario Kart right now, but one thing he always loves and always gets sad if we run out of time to do, is reading books.

Our Roald Dahl adventure began with Fantastic Mr. Fox. It was always my favorite Roald Dahl book growing up, just because Mr. Fox seemed like so much fun and it was a short, adventurous read. We followed that up with The BFG (which I hadn't read before) and then James and The Giant Peach and Danny The Champion of The World, The Giraffe, The Pelly and Me, Charlie and The Chocolate Factory, Esio Trot and we're getting toward the end of Charlie and The Great Glass Elevator.

Dahl can tell one hell of a story and retains so much of his charm even when you're reading these books as an adult. I never managed to become a Dahl completist as a kid, so it's been a lot of fun reading some of his books that I never managed to get around to reading. Both The Giraffe, The Pelly and Me* and Esio Trot are short, fast reads though I found to be the former to be far more whimsical and charming that the latter. That's not to say Esio Trot is bad, per say, it's just... sort of troubling in a way. I mean he goes to all the trouble to make her think that he tortoise has grown with her magic words and then marries her and then Alfie just sort of becomes an after thought that requires what seems to be a hurried post-script to let the reader know that in fact, Alfie had a great life- just with someone else entirely.

The other fascinating thing- which I must look into at some point, are the vague references to Willy Wonka that are peppered throughout the latter half of The Giraffe, The Pelly and Me. It makes sense, since the whole point of that book is that George wants to open a candy store where the Ladderless Window Company makes their headquarters. ('At some point' turned out to be right now: The Giraffe, The Pelly and Me was published in 1985, while Charlie and the Chocolate Factory preceded it by a couple of decades, being published in 1964.) The idea of a shared universe is what I found the most appealing about the book though. I think it would have been more appealing had hints of Willy Wonka had been planted in a book prior to Charlie and The Chocolate Factory, but it's still a charming, fast read never the less.

The BFG was another one I hadn't read before and I was impressed by how faithful the movie adaptation was- though, really, I shouldn't have been that surprised by that, given the fact that Steven Spielburg directed it. Of all the books of Dahl's that I hadn't read, the one that I found to be most intriguing was Danny The Champion Of The World. I wanted to be disappointed in the book, because it seemed to promise more than it delivered, but by the end of it I was on board- and I think honestly, it might showcase the best of Dahl's storytelling abilities and his incredible gift at taking those medium sized moments of childhood and making them seem like the grandest adventures in the world- and that, I think is Danny The Champion Of The World in a nutshell. I also love the fact that it was a story about a father and his son. I feel like those are rare finds these days.

Five and six are strange ages when you're trying to figure out what to start reading to your kid. My own experience is something of a bad example as my deep, deep nerddom and love of books meant that I was reading things like 'The Illiad' at that age. So the trick is that you need to find something that's age appropriate, not too long and fun enough that they'll pay attention. The Elder Spawn and I have had mixed results sometimes: The Wayside School books by Louis Sachar and Bruce Coville's My Teacher Is An Alien were both big hits, while Redwall and Harry Potter we might have pulled the trigger on a year or two ahead of schedule. The one author I keep coming back to, the one author that has been consistent at holding the attention and capturing the imagination of the Elder Spawn has been Roald Dahl.

If you're tired of the same old children's books night and night out and are looking to find that balance between too short and too long, then I can recommend Roald Dahl. (The Elder Spawn loved Fantastic Mr. Fox so much that we now own the movie and we've seen the movie adaptation of The BFG, but we've got plenty movie adaptations to go. Plus, if you're a fan of Roald Dahl and James Bond (a strange intersection, I know) he wrote the screenplay for You Only Live Twice.)