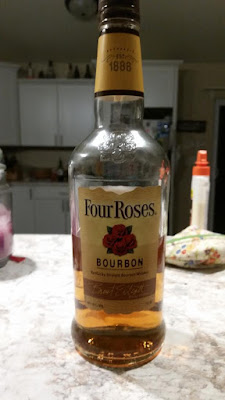 Four Roses Bourbon was a Christmas present from my mother in law- it's just taken me a couple of months to finally get to giving it the review and tasting it deserves. Based out of Lawrenceburg, Kentucky, it's been around since 1888 and in it's Spanish Mission style headquarters since 1910. (I took a peek at them on Google Street View and it does legit look like a beautiful distillery- makes me want go back to Kentucky and pay it a visit.)

The origins of the brand are somewhat disputed. There's some mention made of Rufus M. Rose, who according to some, founded the brand in 1888, like named after him, his brother and their two sons, but the current brand makes no reference to him. Instead, the label tells the story of Paul Jones, Jr. who became smitten with a beautiful Southern belle and sent a proposal to her. She replied that if her answer were yes, she would wear a corsage of roses to an upcoming grand ball. And she showed up, with a corsage of four roses, which gave Mr. Jones the inspiration for the name. No idea which origin story is the correct one, but they're both interesting.

It's had a bit of an interesting journey as a product itself, however. It was purchased by Seagram in 1943 and was a top selling brand of bourbon in the United States for a three-decade period stretching from the 30s to the 50s. After the 50s, for reasons passing understanding, Seagram discontinued the sale of the product in the US, focusing instead of blended whiskey- it wasn't available as straight bourbon in the United States again for nearly four decades until the brand ownership shifted again in 2002, when it Seagram was purchased by Vivendi, who sold it to Diageo, who turned around and sold it to Kirin, which has managed it since and has kept it as a straight bourbon whiskey, much to everyone's delight and relief.

That's Four Roses Bourbon in a nutshell. Let's taste some, shall we?

First Impressions: Initially, it seemed pretty 'meh' to me. I wanted to take my time with this one though. I used it in a mixer. Had a few wee drams throughout the week before I sat down and did my tasting, but my overall reaction was: I've tasted better bourbons than this.

Body: The aroma on this is hard to unpack. There's a sweetness that's immediately obvious to the nose, but there's a crisp feel to it that puts me in mind of apples and honey. (Interestingly, I handed my glass to the Missus and this point and she declared it 'the best whiskey that she'd ever smelled' and that it 'smelled like an old car.' But she also agreed with me about the apples, saying it was 'fruity but not citrusy.') Orchard fruits are prominent here.

Palate: This is going to sound crazy, but when I took the first sip, I immediately thought 'man, that tastes like bananas.' (Just a hint of them.) The viscosity on this is perfect... it's not heavy or syrupy but it's not weak or watery either. It manages a full, complex body while being nicely balanced on your tongue, It's impressive.

Overall: Versatile and more complex than I originally thought, Four Roses Bourbon makes for a delightful bourbon experience. Listed at $26.57 on The Whisky Exchange, it's easy on the budget as well (I'd put this one as a comfortable and proud resident of the 'middle shelf' of your local grocery/liquor store.) My Grade: B+