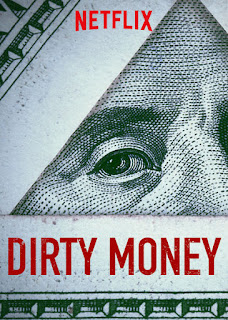 There is a lot to like about one of Netflix's newest shows, Dirty Money. A six episode look at a variety of corporate and business scandals that have dominated the headlines over the past few years, its hard not to be outraged and some of the examples of corporate malfeasance and corruption that they explore.

The quote that's sort of sticking in my craw about this series is found on it's Wiki-Page, which cites Brian Lowry of CNN saying: "for pro-business advocates of deregulation... offers a simple yet powerful rejoinder: Look at the terrible, unethical behavior that corporate entities try getting away with when they think nobody's looking." I kind of agree with this, but I also think it's nowhere near as simple as this quotes pretends.

Yes, Dirty Money does tackle corporate scandals like the VW Emissions scandal and yes, it's shocking. I just assumed that VW had cheated in a regular, shitty big corporate kind of way, but no- it was far more sinister than that. They actually created a device that detected when their cars were in a testing environment versus an actual road environment, so the emissions looked good in the lab, but went hog-wild on the road. (There's also a jaw dropping revelation that they were considered testing the effects of these emissions on human subjects, but decided not too, because of 'bad optics.')

But VW is probably the most run of the mill corporate scandal, 'this is why deregulation is bad' the show tackles. They delve into shitty industries that prey on poor people (payday loans), look at the ethics of stock shorting and drug pricing (I'm honestly not sure where the show lands on that episode. Drug price shenanigans bad, but they seem oddly neutral on the idea of stock shorting, which is interesting given the role that practice played in the housing crisis of 2008.) They look at big picture corruption when they look at HSBC and how much money they laundered for the Sinaloa Cartel. (What happened to HSBC, you might ask? Oh, that's right. Nothing.)

The final two episodes though are probably the most interesting. They delve into Canada's great Maple Syrup Heist and look at the ongoing struggle between the Federation of Quebec Maple Syrup Producers and the rebel producers that don't want to follow the Federation's rules. (This would be an episode where regulation is the problem, not the solution to me.)

And then they tackle the biggest and most obvious fish of them all: President Donald J. Trump. I had some hope for the Trump episode. I thought they were going to present a fascinating portrait of a man who bet big in the 80s, lost it all and then spent the 90s reinventing himself as a master of branding and marketing. Yes, he's a P.T. Barnum and a snake oil salesman, but the history of American politics is littered with examples of politicians of a similar vein. I would have been more interested in finding out how much of his schtick he actually believes, but of course, Dirty Money can't help themselves, so they trip and fall into the Russia trap just like everyone else does. Oddly enough, they bring in one of the Planet Money guys to interview and he raised the possibility that Trump might genuinely not know the full extent of his business dealings, but mentioned that designing your business to insure that you don't know (willfull blindess) is still a crime. 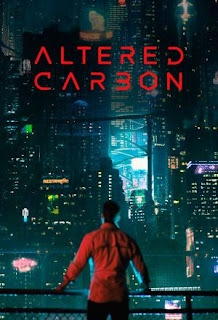 Altered Carbon, Netflix's new cyber-punk drama based off of the Richard Morgan novel of the same name doesn't quite measure up to the glorious perfection that is Blade Runner (but then again, who does) but has a hell of a good time trying too. Set nearly four hundred years in the future, where humanity has reverse engineered cortical stacks that are implanted on the base of the neck and can store your consciousness and enable to be transferred between bodies (which are now known as sleeves.) Awakened after two centuries 'on ice' and placed into a new sleeve, Takeshi Kovacs (Joel Kinnaman) is given a choice by Laurens Bancroft (James Purefoy), one of the wealthiest men of the settled worlds: go back 'on ice' for the remainder of his prison sentence or to help Bancroft solve his own murder.

Kovacs settles on the latter option and spends the rest of the show's ten episode run fighting and shooting and having lots and lots of sex with a variety of people in his single minded quest to find the truth. To be honest, there were points watching this where it seemed to drag on a bit, but the show never managed to get itself into a rut. By the end run of episodes, when Kovacs begins to figure out that a familiar face from his past (two centuries or so ago) is in fact alive, well and behind it all, that, I think is when Altered Carbon really begins to come into it's own. Kovacs is an Envoy, the last soldier of a failed uprising against the new world order two centuries before and he's haunted by his past and the loss of his love and fellow Envoy leader, Quellcrist Falconer (Renee Elise Goldsberry). As more details of his past come back to haunt him, I think it deepens the complexity of the character and allows the show to tell a more complete story.

I think it'd be interesting to interview some of the actors about how they approached this show, given the ability to move your consciousness into a different body whenever you want. Without fault, all of the actors portraying characters that have shifted bodies do an amazing job of convincing you that they are that other person- just in a new body, but I think it's worth shouting out Matt Biedel's performance especially. A tattooed and bearded gangbanger one episode, he plays someone's Abuela (back for Dia de Los Muertos) the next and a full blown Russian mobster after that- his appearance doesn't change a bit, but the shifts in his performance are incredibly well done. (He's a pretty minor-ish character overall, but he stole a few scenes here and there just making the most of the role he had.)

I've always said that good science fiction always has something to say about the present and Altered Carbon is no exception- though in there case, they're casting their eyes forward a few decades to coming conversations about the nature of humanity itself. At some point in the future, someone's going to figure out radical life extension or uploading or something of that nature at which point, talking about what makes humanity actually human is going to become a very interesting conversation indeed. (I'm honestly not sure what to think about it all yet. I wouldn't want to be like a 90 year old for fifty extra years, but if you could get a little more time to do everything you want to do with your life, that might be okay by me.)

Dirty Money: a solid addition to Netflix's growing collection of documentary series, it wanders into weeds a little when tackling the President, but not fatally so. My Grade: *** out of ****

Altered Carbon: a cyber-punk romp through the future, it gets a little uneven in parts, but not enough to get the show stuck in the mud. A vision of humanity's future that is dazzling and troubling by turns, I can't wait for more of this one. My Grade: **** out of ****