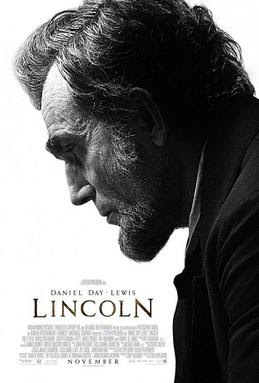 This movie has been on my 'must-watch' list for quite a few years now, but for whatever reason I have never gotten around to it, so when it popped up on Netflix- I'm assuming as an President's Day gift, I loaded it up and plunged right in.

The movie opens in January of 1865 and President Lincoln (Daniel Day-Lewis) is expecting the Civil War to be over soon. Anticipating this and worried that his Emancipation Proclamation could be discarded by the courts after the war, he is adamant and determined to secure passage of the Thirteenth Amendment to abolish slavery before the end of the war when the returning Confederate States would presumably vote it down. He wants to eliminate any possibility that freed slaves could be re-enslaved.

However, the political atmosphere that confronts him is challenging. Radical Republicans worry that they cannot secure the support of western and border Republicans to pass. With multiple Democrats having lost their re-election bids in the fall of 1864, many urge the President to wait for the new Congress to be admitted, but the President will not bend: he wants the Amendment passed before the end of the war, which means they will need support from Democrats in Congress as well.

To shore up the support of the Republican Party, Lincoln must rely on Francis Preston Blair (Hal Holbrook) a founder of the Republican Party who is keen to end hostilities sooner rather than later, as victory for the Union seems highly likely but is not yet fully secured. In exchange for his support on the amendment, Blair wants Lincoln to allow him to immediately engage the Confederate government in peace negotiations- which Lincoln knows might cause him trouble with the Radical Republican faction in the party, but in order to secure the support of Blair and his faction he authorizes the mission.

Lincoln and his Secretary of State, William Seward (David Strathairn) work to secure Democratic votes- but are unwilling to go so far as to offer bribes, instead offering patronage instead. The debate on the amendment begins and at a crucial point in it, racial equality advocate Thaddeus Stevens (Tommy Lee Jones) moderates his position, arguing that the Amendment represents only legal equality and not actual equality. When rumors of Confederate peace envoys (whom Lincoln has instructed be kept out of Washington) begin to circulate, many call to postpone the vote, but Lincoln's instructions allow him to inform Congress that there are no peace envoys in the city, which allows the vote to proceed and it passes by a two vote margin.

This allows Lincoln to meet with the Confederates and tell them that slavery cannot and will not be restored before the end of the war- as the Northern States will vote to ratify as well as reconstructed legislatures in the south- enough to secure approval of the Amendment. The writing is on the wall for the South soon thereafter and they surrender, ending the war.

The movie closes with Lincoln heading off to Ford's Theater, where he is assassinated. They show his death the next morning and close with him delivering his 2nd Inaugural address.

This was an incredible movie. I loved the choice to focus on one part of Lincoln's presidency rather than casting a wider net to try and capture the whole thing. So much went down in his life and career, so I think that focusing on just the 13th Amendment actually helped to capture the essence of the man more effectively than a more general biopic would have. Daniel Day-Lewis is just... well, he is Lincoln. Sally Field is great as Mary Todd Lincoln. Tommy Lee Jones as Thaddeus Stevens- also excellent- in fact, there's really not a bad performance in this movie.

Even though you know that the 13th Amendment passes, the debate and the vote are awfully tense and nail biting. (And the rough and tumble nature of the debate in the House makes me wish we could import a little of that to the present day, instead of watching people drone on and on and on to a half empty chamber on C-SPAN.)

Overall: a beautiful historical moment with the right script and the right actor for the role of a lifetime. I think a lot about Bruno Ganz's performance as Hitler in Downfall- he seemed to inhabit the role and almost become the dude and Daniel Day-Lewis more than matches Ganz by becoming one of our greatest Presidents. My Grade: **** out of ****