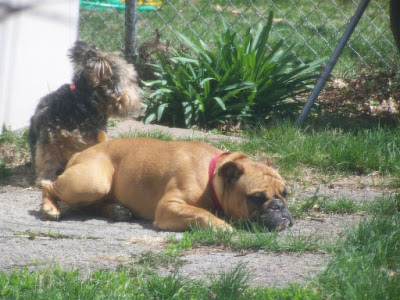 Friday began with a sad trip to the vet to put our Yorkie, Sophie to sleep. We'd known for awhile know that she had a large mass on her abdomen and was showing signs of heart failure and had been doing our best to keep her comfortable with a couple of medications that seemed to be helping. But in the last week or so, she had taken a turn. She just wasn't comfortable any more and was having trouble getting up sometimes and it was getting harder and harder for her to breathe, so we made the appointment and took her in.

Sophie was a sweet little dog that came into our lives thanks to a friend of my sister in law's who had broken up with her fiancee. The fiancee was being charming about this poor little dog, threatening to take her to the pound and my sister in law swooped in to save the day- but through a series of circumstances that I'm still kind of fuzzy on, the Missus (who was The Girlfriend at the time) and I ended up sort of adopting her as our own.

When we lived in Mankato, we would take her all over the place with us. We'd do regular walks and go to parks with her (we even took her to see a bike race, one hot summer afternoon). She used to jump in bed with us and was the best little snuggler when she wanted to be as well. She loved tummy rubs and running around outside.

As the years passed and we moved to Iowa City and Winston joined the family, I feel like she sort of faded into the background a little bit. We never pampered her as much as we could have (or probably should have) but I think she liked being present but also being able to do her own thing after awhile. She'd find a corner to take a nap in. She'd be at the ready for any bread bones or treats, but in general, she slipped into old age so quietly we almost didn't notice, really.

Sophie was the dog that completely turned me around on small dogs. I would, at some point in the future, happily give serious consideration to getting one again. She was sweet, gentle and just the best puppy you could ask for and it was hard to let her go, but I'm glad we did. We kept her comfortable for as long as we could, but it was time and hopefully she's breathing easy and running free somewhere.

Friday was bad enough but somehow managed to get even worse when we took poor Winston in to get checked out. Poor old dude had been having a hell of a time pooping for a week or so and just was getting more and more uncomfortable and was in obvious pain after awhile. We were expecting that he had probably eaten something he shouldn't have and had a partial bowel obstruction (his infamous tampon eating incident meant that it was not entirely out of the realm of possibilities for him) but after checking him out, the vet found a mass just above his rectum that was pressing down on it and sealing it shut. He referred us to a surgeon if we wanted to know more, but was pretty convinced that the mass, whatever it was, was inoperable due to it's position below the spine.

We had medications for Sophie that had helped to keep her comfortable for awhile, but there was really nothing we could do for poor Winston. They prescribed up some stool softeners, which we didn't end up using, because we didn't want to risk making things worse for the poor guy. Bad enough he couldn't poop, even worse if he was full of laxatives, crampy, miserable and still not really able to poop if they didn't work. We made an appointment for Monday to take him in to get him put to sleep, but after a day or so of just watching him be absolutely miserable, neither the Missus nor I could do it any more, so Saturday night, barely a day and a half after Sophie had left us, we took him in to the emergency vet and sent him over the rainbow bridge to join Sophie.

Winston was our million dollar dog- and I mean that almost literally. He was adorable as a young guy- boisterous and fun, sweet and snuggly. I have a picture of him floating around somewhere doing tummy time with one of my nieces when she was just a tiny baby. He loved to be by people and had no concept of personal space, which could get a little annoying at times (especially when he was constantly licking you.) He'd also do this thing where he'd sit next to you on the couch and sort of face away from you like he was trying to be all non-chalant about it and then, 'BOOM' he thump his head into you and snuggle you as hard as he could.

He claimed space on the end of our bed that required negotiation and moving him to exactly the right spot so we could both stretch out comfortably every night. On occasion, he would sneakily creep up the bed, so that by morning there would be a large bulldog between us and one of us (usually the Missus, it seemed) would have all four paws in our backs.

While he was a gentle and faithful sentry for both our babies, he and the Elder Spawn butted heads after awhile and one of the saddest things about letting him go was the missed opportunity there. He and the Elder Spawn should have been best buddies. I'm really sad that they weren't. (Though, to be fair, he became the Medium Spawn's puppy after awhile and it was adorable.)

But he also had terrible allergies every summer that required special shampoos, cortisol shots, medications and copious amounts of Benadryl. Moving to the new house seemed to help a little bit at first, but last August he had another bad flare up. And then his knees started to go bad (our new house had stairs, which is something that he had never really had to deal with on a regular basis.) Then his tail developed a massive infection and had to be removed. It was just one thing after another with the poor guy until finally it was too much.

Winston is the reason that we both love bulldogs and absolutely won't be getting another one.

He could be sweet and loveable and cranky and cantankerous all at the same time and his farts were absolutely deadly. But we'll miss him. I never thought he and Sophie liked each other all that much, but apparently like an old married couple that's been together for years, they couldn't be apart. Between losing two cats (Harper, a few years back and our big guy Moxie to heart failure a few months back) and now this, we're down to one in our menagerie.

These dogs were, in their own way, the best dogs you could ask for. We'll miss them both.

(I should just note in passing that I haven't actually seen either of the 48 Hrs movies, but given the fact that Rotten Tomatoes rates the sequel, 'Another 48 Hrs' at a whopping 15%, it seemed fitting.)