This Week In Vexillology #250

March 03, 2018
It's March and I was struggling to come up with a fresh idea or two for this feature when a handy dandy dive into Wikipedia gave me some inspiration. It's St. Patrick's Day this month and I happened upon a flag of the four provinces of Ireland: Connact, Leinster, Munster and Ulster. I figured- four weeks and four provinces will take care of the bulk of the month of March, so in celebration of St. Paddy's Day and all things Irish, we're starting off This Week in Vexillology with the flag of Connacht: 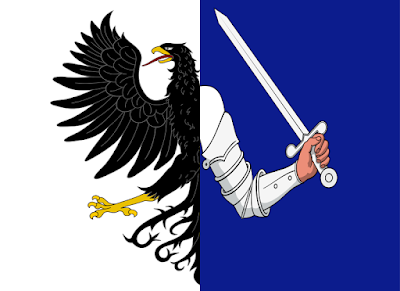 First of all: how bad ass is this flag? A big strong arm and a sword on one half and a fearsome looking eagle on the other- I don't know what to think except: bad ass. (And be possibly worried about a one winged, one armed mutant black eagle coming to kill me with a sword.) The next (and perhaps more obvious) thing to tackle would be a simple question of geography: just where the heck is Connacht? Well, it's here: 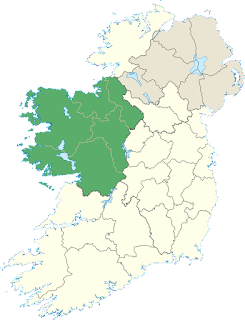 That part in the green there? That's the province of Connacht, which consists of the present day counties of Galway, Leitrim, Mayo, Roscommon and Sligo. It had a nice run a few centuries back culminating in Tairrdelbach Ua Conchobair and his son Ruaidri Ua Conchobair expanding the ancient Kingdom's influence enough that both became kings of Ireland. (Wikipedia also tells me that of the four provinces of Ireland, it's got the greatest share of Irish speakers, clocking in at about 5-10% if you wish to share my joy at learning linguistic nerd facts like that.)

Now that we know where it is, we've got to turn our attention back to the bad ass mutant sword carrying black eagle flag of Connact and really get down to some serious questions.

Like, what about that Eagle? In terms of heraldry and symbolism, eagles aren't usually associated with this neck of the woods in Europe. St. Patrick (the man himself) drove out all the snakes. Across the water you have Wales with it's dragon, Scotland with it's unicorn and England with it's Lion...  you've got to go to central Europe and the Holy Roman Empire to get into eagle territory. (Albania's flag still features a double headed eagle. German symbology features an eagle. It's very central European.) Wikipedia (that font of all knowledge) admits that even they don't have a satisfactory explanation for all of this- the best that they can come up with is an Irish monastery that was established in central Europe near the town of Regensberg and it's royal benefactors (which included Ruaidri Ua Conchobair) were granted the arms and sort of brought them back home and began to use the arms.

Our celebration of all things Ireland is off to a great start! Remember, until next time keep your flags flying- FREAK or otherwise!