This Week In Vexillology #245

January 27, 2018
File this under: The More You Know, but Monday is, in fact, Kansas Day. Yes indeedy, our neighbors to the south have a day that celebrates their admission to the Union in 1861. According to Wikipedia:

If that doesn't sound like an excuse to get lit and party, I don't know what does! (Though in another fact for 'The More You Know' file, I didn't know that 'Home On The Range' was the Kansas State Song.) But, in honor of Kansas Day you might be able to guess what flag we're going to look at this week...  that's right... it's Kansas: 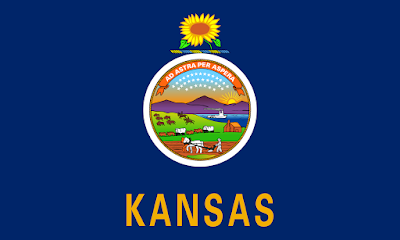 Adopted September 24, 1961, the flag of Kansas is...  sigh. Well, put it this way: some day states are going to roll up their sleeves and start moving away from the whole 'seal on a bedsheet' thing and design some really kickass flags. But that day hasn't arrived yet, so Kansas remains... Kansas.

First of all: I'm going to award some bonus points for the sunflower on top of the seal. It's a distinctive symbol of the state (which, no surprise is 'The Sunflower State') and helps Kansas stand out a little bit from the other states in the 'seal on a bedsheet' crowd. However, I'm going to add some demerits for the name below the seal. I hate it when states do this...  if you have to put the name of your state on your flag to make sure people recognize it, you're doing it wrong.

In the center of the flag, you've got the Great Seal of the State of Kansas. As with most seals, it's got a lot going on- not that you can really tell by looking at the flag. You've got: a landscape with a rising sun (the east), a river and steamboat, which stands for commerce, a settler's cabin and a dude plowing his field which stands for agriculture, a wagon train heading east which stands for American expansion and pioneer life and Native Americans hunting American bison. The cluster of thirty four stars at the top of the seal represents Kansas being the 34th state accepted into the Union. At the very tippy-top,  you've got the state motto: 'Ad Astra per Aspera'  which is Latin for 'To The Stars through difficulties.'

And that's the flag of Kansas! Happy Kansas Day to all my peeps in Kansas and remember, until next time keep your flags flying- FREAK or otherwise!