January 08, 2018
Editor's Note: A New Year means it's time to play around with new features here on the blog, so I'm pleased to present the first edition of Kidlit, which will be a mixture of reviews, commentary and thoughts on the books that my kiddos are either reading or making me read to them.

Both the Elder Spawn and the newly promoted Medium Spawn love books, but while the Elder Spawn loves reading a book, the Medium Spawn has a mild obsession with them. I honestly think that if he could keep you in a room reading books to him for the entire day, he would and of late, he's been especially into The Berenstain Bears. 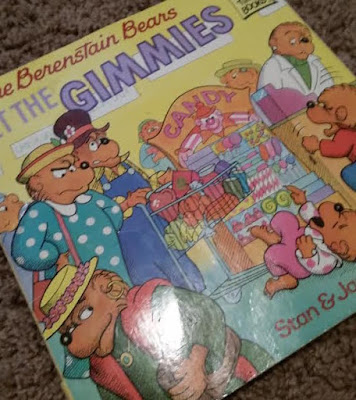 The Berenstain Bears had a weird moment in the pop culture zeitgeist a couple of years back, when many insisted that they were the proof that we have, in fact, slipped into an alternate timeline of some kind, as there are many people who would swear blind that they remember read about The Berenstein Bears and not The Berenstain Bears. While the election of our current President might convince many that we are in fact, living in the darkest of timelines, there's a more interesting explanation of the phenomenon: The Mandela Effect.

(Basically, it's a kind of collective false memory and it's sort of a fascinating rabbit hole to go down if you really think about it. I could swear that Sinbad did star in some kind of genie movie back in the 90s, but there's absolutely zero evidence that he did so. Shaq, on the other hand, starred in that cinematic classic, Kazaam. So there you go.)

As books go, The Berenstain Bears have a pretty simple formula. There's a problem of some kind and Mama Bear and/or Papa Bear help either Brother or Sister Bear (sometimes both) learn some kind of an important life lesson. The stories can be saccharine and sweet and make you roll your eyes more than a little bit sometimes, but in general, there are worse kids books out there. I can't complain too much about them overall, but there are a couple of critiques that have jumped out at me.

First, these books work better when the kids are the focus. 'Get The Gimmes' is a perfect example of this. Brother and Sister get a bad case of 'the gimmes' and Mama and Papa have to figure out how to solve the problem (with a little assist from Gramps and Gran). All of which is fine, but Brother and Sister become secondary characters in this one in ways that annoy me. They just sort of whine and nod their heads when they're talked too. The focus is more on Mama and Papa realizing they have to up their parenting game. All of which is fine, but compared with say, 'The In-Crowd' or 'The Bully', 'The Gimmes' is weak sauce, because what kid is going to connect with a kids book delivering a lesson to their parents? (I can see why parents would want to read this book, obviously. But I also hate the idea of children's book that parents want to read instead of kids, you know?) These books are at their strongest when it's either Brother Bear or Sister Bear solving the problem and learning the lesson.

Second, there's moments of repetition that stick out like nails on a chalkboard. 'The Slumber Party' has a perfect of example of this, where the book says: "An angry and disappointed Mama Bear came to take Sister home." And then what does Mama say, right after that sentence: "I'm very angry and disappointed." Argh. I've found a couple of clunky sentences that jump out at me here and there reading a few of these books. (Don't worry: there's also inconsistent rhyming in some of the Thomas and Friends board books we have that bothers me too, so I have other complaints, never fear.)

These books have their detractors out there and I've read a few clunkers in the series here and there- and as the series has evolved, so have the questions- this fall collection features a Bear Preacher which opens up the whole issue of Bear Theology and how that all works. While the Thanksgiving story they present is pretty traditional, I sort of raised an eyebrow at the 'Native Bear' saying 'ME SQUANTO' and the pilgrims in their little play being all, 'He speaks English, what a miracle!' about it all. But really, my biggest question is about their house. 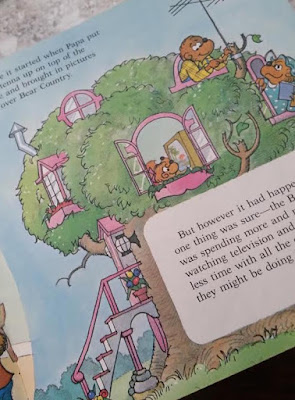 I mean, at the outset, I should say: I get it, it's a kids book. But the nerd in me has immediate questions. How many bedrooms does it have? Is it a split foyer or a multi-level type of situation? There's a root cellar (a literal root cellar) which shows up in 'Messy Room' and is that underneath the tree itself? Is the trunk on this bad boy thick enough to hollow out? How does it all work? If this artist can come up with floor plans for sitcom apartments, why hasn't someone come up with a floor plan for the Berenstain Bears tree house down the sunny dirt road in Bear Country? Come on, internet. Get on that.

Happily, in terms of expanding mediums, YouTube helpful has all the episodes of the old Berenstain Bears cartoons from back in the day available that sheds a little more light on the interior of the house. (There's a guest bedroom that Mama and Papa paint at one point.) The cartoon is actually develops the characters and fleshes out the stories a little more than the books do, which is kind of a surprise and as an older cartoon it holds up pretty well. Full episodes are about 24-25 minutes long with single 'stories' being about 10-12 minutes a piece, which is kind of handy if the kiddos want to watch something, but you don't want to get stuck in cartoon hell for a full half hour.

Overall: As kid's books go, this is a classic, tried and true franchise that might make you roll your eyes now and again, but in general, imparts solid, entertaining lessons for your kiddos. The writing can be a little uneven now and again in painfully obnoxious ways, but in general you can't go wrong with the Berenstain Bears.