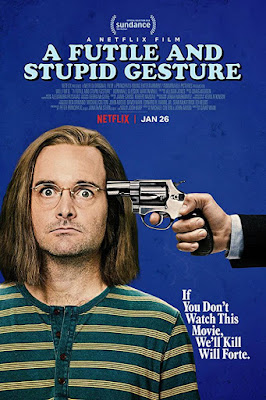 I was bored and watched this movie on a whim, having absolutely no idea what to expect. The story of the rise of the National Lampoon seemed like it had a lot of potential and could be pretty interesting. And by and large, it was pretty interesting.

The movie opens with an 'older' Doug Kenney (Martin Mull) arguing with someone off camera about how to start the movie about the story of his life. When initially, we see a brightly lit slow motion seen of a young Doug passing some jumping cheerleaders on his way to a funeral, 'older' Doug declares that it's a shitty way to start a movie and instead recommends fast forwarding to his first years at Harvard.

The genesis for National Lampoon started with Doug Kenney (Will Forte) who always seems to declare that he's from Chagrin Falls, Ohio meeting Henry Beard (Domhnall Glesson) a more typical Harvard attendee from old Eastern money. The two of them eventually found their way to the Harvard Lampoon where they ended up churning out a parody novel of Lord of The Rings called Bored of the Rings. Graduation eventually rolls around and Henry is all set to go to law school, but Doug persuades him to take the Lampoon national and after quite a few false starts they get it up and running.

And incredibly, it works. (Though Doug manages to get married and divorced along the way.) Soon enough, the Lampoon is expanding into radio and Doug is taking on more and more of the editing and the work and trying to hold it all together and eventually, it's all too much and he has a break down and takes a leave of absence from the publication for awhile. But not before assembling the who's who of the comedy world including, Bill Murray (Jon Daly), PJ O'Rourke (Nelson Franklin), John Belushi (John Gemberling), Harold Ramis (Rick Glassman), Christopher Guest (Seth Green), Gilda Radner (Jackie Tohn) and a bunch of other people whose names I didn't quite recognize, but are probably really famous and important and I've seen them in a bunch of stuff.

Doug cracks under the strain of it all eventually- the magazine is flying off the shelves and they expand into radio and then a stage show. He takes a leave of absence, but it's all different when he comes back and he gets assigned a special project which he turns into National Lampoon's Yearbook which turn out to be an early genesis for the ideas that would form the basis of Animal House.

The investors that started the magazine have a five year buyout contract and when the day finally rolls around, Henry cashes out and goes his own way. Doug remains with the magazine until he too leaves to direct National Lampoon's Animal House. After the movie, he's riding high, trying to figure out what to do next- he found himself a new girlfriend, Kathryn Walker (Emmy Rossum) who supports him and tries to get him to confront his issues and come to terms with the death of his brother. (That funeral at the start of the movie? It was his brother's and Doug has been struggling to measure up in his parents eyes ever since.) With the emergence of Saturday Night Live taking a lot of the talent and writers from National Lampoon, Doug heads to Los Angeles and tries to make it as a screenwriter, but ends up doing a lot of cocaine instead.

Eventually, Caddyshack emerges from the mountains of cocaine, but Doug's addictions keep spiraling down leading to his eventual (presumed) suicide. The two Dougs (Mull and Forte) watch as his friends and family attend his funeral and Doug's parents realize how love and respected he was.

Overall: I don't really know what to think about this movie...  it's a fascinating story to tell with an excellent cast, but part of me feels like it should have been funnier, somehow. Or maybe explored the psyche of Doug Kenney a little more than it did. Using Martin Mull as a kind of narrator/fourth wall bending Greek chorus was interesting and I almost would have liked to see more of it. I honestly had no idea what happened to Doug- I assumed since Martin Mull was narrating that he was still alive and well, but nooooooooooooooope! (That was kind of a bummer.) My Grade: ** 1/2 out of ****