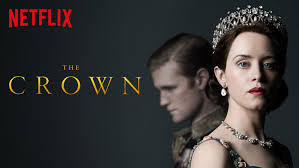 Season 2 of The Crown consumed a hefty chunk of my December and it's with no small amount of sadness that we bid the current cast goodbye at the end of the season to be replaced the next season with brand new faces. Olivia Colman is the only officially confirmed replacement I've seen so far- she's stepping into the role of The Queen, while rumors of Helena Bonham-Carter taking over as Princess Margaret from the excellent Vanessa Kirby are swirling I don't think that's been confirmed yet and I have no idea who's replacing Matt Smith as Prince Phillip.

The season opens with Elizabeth and Phillip discussing the state of their marriage aboard the royal yacht in Lisbon, recognizing that divorce is not an option and that they're stuck with each other. Five months earlier, Elizabeth becomes convinced that Phillip is having an affair after finding a photo of Russian ballerina in his briefcase. Harold MacMillan tries to convince Prime Minister Anthony Eden not to pursue a military solution to the Suez crisis. Suez, of course, dominates the early episodes- Louis Mountabatten tries to warn Elizabeth about the secret plan concocted by Britain, France and Israel to seize the canal without support from either Parliament or the United Nations, but despite her sharp questioning of Eden, she ultimately gives her support on his advice and the military action begins.

Of course, it turns out to be a complete disaster- and Eden is eventually ousted to make way for MacMillan, but there are more pressing matters afoot. Phillip has been gone on his royal tour for months, his private secretary, Michael has accompanied him leaving behind an increasingly unhappy wife who is contemplating divorce. Royal secretaries worry that their divorce will lead to questions about the Royal marriage and it does, which leads to the rest of the conversation on the Royal Yacht that we see in Episode 1. Phillip's makes it clear that he doesn't want to be outranked by his sons and is given the title of Prince Phillip.

The first three episodes were something of a trial, to be honest. While Phillip is off on his man voyage, there's a lot of internal angst and the supposed tension in the royal marriage seems very forced to me. (It seems more like a perception thing: Phillip's private secretary is philandering and therefore, Phillip must be as well, even though there's scant evidence of that presented in the show. It's sort of, implied, here and there. But never explicitly.)

Things get a lot more interesting after the first three episodes...  there's Margaret drama to be had, as she accepts a marriage proposal and then breaks it off, only to find a dashing photographer to intrigue her in the form of Anthony Armstrong Jones whose photo of her shocks the Royal Family when it's published in newspapers. There's Nazi drama with the abdicated King Edward VIII as war files reveal exactly how deep his relationship with the Nazi high command went. Princess Margaret gets engaged to the photographer (eventually, which the subsequent amounts of drama and early 60s Bohemian swinging in swinging London.)

In terms of, 'interesting tidbits of history I don't know', the episode 'Marionettes' which details the criticisms of Lord Altrincham, whose push to get the monarchy to adapt to post-war, post-Suez society actually had far reaching influences on the institution itself- one of his suggestions, namely to broadcast the annual Christmas message is still practiced today. The other episode that sort of caught my eye was 'Dear Mrs. Kennedy' which dealt with the meeting between the Queen and Mrs. Kennedy and the subsequent results of that meeting.

Much, of course, has been made of the episode 'Paterfamilias' which explores Prince Charles and his rather miserable time at Gordonstoun School in Scotland. It also marks the first time that the show gets into Prince Phillip's backstory and into his head almost and tries to unpack what makes him tick, with decidedly mixed results. He seems like a good husband, great father and all around 'good soldier' in the grand scheme of the monarchy at one instance and then yet haunted, bitter and demanding of his children the next. Matt Smith has been brilliant in this role because sort he of kept both ends of that spectrum in balance, but this is an episode where I think it sort of gets away from him and it seems out of character.

The second season ends with, what else? The Profumo Scandal, which brings down the MacMillan government and sees a pregnant Elizabeth retreat to Scotland to wrestle with her suspicions that Phillip is somehow tied up in the scandal. There's sketchy evidence at best linking Phillip to it, but nevertheless Elizabeth remains insecure in their marriage, but is somewhat reassured when Phillip reaffirms his love and support for her.

Overall: The Crown remains an excellent, ambitious piece of television and I'm interested to see how the next season turns out with the new cast. I'm going to miss Claire Foy, Matt Smith and Vanessa Kirby. It seems like a risky move, considering the talented cast they have now, but entirely in keeping with how ambitious this show wants to be. My Grade: **** out of ****