Bookshot #104: The Fall of Hyperion 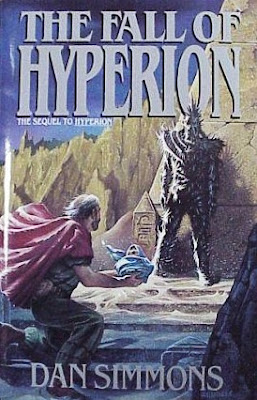 The end of Hyperion was damn near perfect: it finished off an incredible piece of literature and left me begging for more and happily, its sequel, The Fall of Hyperion ties up everything left over from the first book and brings the fates of all the characters to an amazingly satisfying conclusion. While Hyperion is structured around each of the seven pilgrims telling their story drawing on things like the Decameron and Chaucer's Cantebury Tales for inspiration, The Fall of Hyperion focuses more on the John Keats characters from the first book, introducing a second reincarnation, Joseph Severn, an artist.

When Severn dreams, he dreams of the pilgrims from Hyperion and what they are currently doing, which is of great interesting to the CEO of the Hegemony, Meina Gladstone who is monitoring the situation on Hyperion and what the believe to be the impending invasion of the 'Ousters.' While the political struggles and tensions within the Hegemony rise throughout the book, the pilgrims on Hyperion have to deal with problems of their own. Father Hoyt is the first to encounter the Shrike when he enters the Jade Tomb, hoping to relieve himself of the intense pain inflicted by his cruciform parasite- he tries to commit suicide, but the Shrike kills him instead. Instead of Hoyt reincarnating however, his mentor Father Paul Dure comes back instead.

With food running low, and Sol's daughter getting younger with every passing minute, the Pilgrims demand The Consul bring his ship to them so they can get food and medical aid for those of them in need, but The Consul discovers that his ship has been impounded by the Hegemony authorities. So, they nominate Lamia and Silenius to hike back to Chronos Keep to get food. Silenius leaves Lamia to go into the City of Poets to finish his Hyperion Cantos and is attacked by the Shrike and impaled on the Tree of Thorns which is at least partially real. Lamia gets to Chronos Keep, but is attacked as well and plugged into the datasphere.

Colonel Kassad, meanwhile has begun his fight against the Shrike aided by the mysterious Moneta and he eventually succeeds in his mission, dying in battle. Lamia finds out about some of the motivations of the mysterious techno-core and they finally find out what Het Masteen (who vanished in the middle of the last book) has been up to and what his deal is.

In the meantime, things have gone sideways on Gladstone and the Hegemony. The Ousters- or at least, people they think are The Ousters have beached the web that connects all the worlds of the Hegemony together and suddenly the expected battle for Hyperion has become an apocalyptic battle for the future of all mankind. Both the pilgrims and Gladstone soon figure out who the real enemy at their door is and in an unusual twist, it turns out not to be the Ousters at all, but faced with an impossible choice, Gladstone makes a call that changes humanity's fate. The purpose of the Shrike is revealed, the fate of all the pilgrims is decided (actually, they do okay, with the possible exception of Kassad, who does die in battle.)

This was a damn near perfect sequel. It answered every question that you had been asking since the first book. It provided satisfying and complete ending for all the characters and left the door open to explore more of this universe- I'm assuming in Books 3 and 4, Endymion and The Rise of Endymion, which I'm going to have to get to at some point. (I don't know when... I'm plowing through a lot of books lately, but I've got to finish the series out now.)

Overall: an eminently worthy sequel, I raced through The Fall of Hyperion about as fast as I raced through it's predecessor. The influences evident throughout the book that range from the poetry of John Keats to the teachings of John Muir (along with Jesuit paleontologist Pierre Teilhard de Chardin, Stephen Hawking and references to Jack Vance) are beautifully woven into the story to create a vision of the future that is stunningly unique. I'd say ***** out of *****