This Week In Vexillology #242

January 06, 2018
Two hundred and forty two of these posts later and we're into a new year and facing some new challenges: I'm starting to run out of flags. I don't know how I'm going to take these posts up a notch in 2018, but I'm going to try and dig a little deeper and go some places we've never been before and revisit some we have. So, This Week In Vexillology, we're heading back to Lithuania.

My original post on Lithuania was all the way back on March 22nd, 2014 and it's a bit...  slim. Slimmer than I would like, to be totally honest. Yes, Marko Ramius is from Vilnius and yes, you can make obscure references to The Hunt for Red October if you want, but if you go a little deeper, there's more to Lithuania than meets the eye. For instance, January 1st is Flag Day in Lithuania, which marks the anniversary of the day the Lithuanian flag was raised on Gediminas' Tower in 1919.

We've looked at the Lithuanian tricolor already, so let's take a peek at their Coat of Arms: 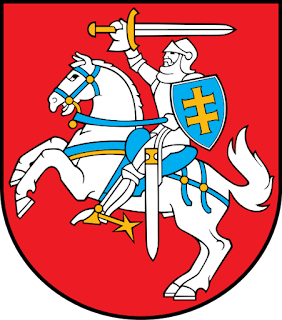 The knight on horseback has been a symbol of Lithuania and the Grand Duchy of Lithuania since around 1366- it's mentioned as a symbol of Narimantas, the second son of Gediminas. (Another symbol that dates from this period are the columns of Gediminas, which are seen at the bottom of the Parliamentary version of the full Coat of Arms.) By the 15th Century, knight on horseback had become the main representation of the Grand Duchy of Lithuania. The colors began to swing in the sharper focus in the next century- with the shield of the knight being azure and the double cross (which was derived from the Hungarian cross) began to be seen as part of the symbol.

The symbol itself gradually became to be known as the Vytis, though it's unclear as to where the term came from. It gradually seems to have emerged in the 19th Century and the double cross continues to play a role in the sub-national flags of Lithuania: 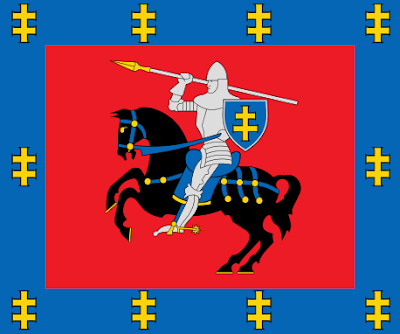 This is the flag of Vilnius County- but all ten county flags of Lithuania follow a similar design. The fringe outside is a border of the double crosses seen on the shield of the Vytis, while each county's flag usual features a portion or of all of the main symbol of their respective coats of arms. (I can't honestly find a good explanation for the Coat of Arms, but looking over the history of the national Coat of Arms, it seems like Vilnius has an earlier iteration of the arms, featuring a knight with a lance instead of a sword.)

So Happy Belated Flag Day, Lithuania! (According to Google Translate: "Laiminga veliavos diena, Lietuva!") And remember, until next time keep your flags flying- FREAK or otherwise!