This Week In Vexillology #244

January 20, 2018
I did the research for the flags this month last month and then I forgot why I picked the flags I picked so have had to dive back into Wikipedia to figure out why I picked 'em and this week, it took me awhile to figure out why I selected the Pitcairn Islands- turns out they were first discovered on January 26th, 1606 by Portuguese explorer Pedro Fernandes de Queiros. The islands were made more famous by the Mutiny on the Bounty and they remain a British Overseas Territory today, though with a dwindling population. (Unfortunately, they attracted a certain amount of infamy about ten years back when seven men- which accounted for nearly a third of their population, were charged with a variety of sexual offenses.) This is their flag: 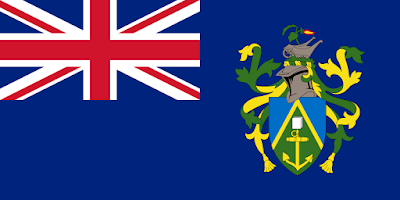 The flag of the Pitcairn Islands is similar to the flag of a lot of other former British colonies or overseas territories- the Union Flag is in the canton and the coat of arms for the Islands are in the fly. The coat of arms features a shield depicting anchor and Bible from the HMS Bounty, which stand for the ancestral history of the people of the islands, most of whom are descended from the sailors who mutinied on the Bounty in 1789. The green triangle flanked by blue on either side of the shield represents the island rising from the ocean. At the top of the shield, you see a flowering slip of miro (which I guess is a flower) and a Pitcairn Island wheelbarrow perched on top of the helmet.

The Coat of Arms was granted by royal warrant all the way back in 1969. The flag however, wasn't adopted until 1984. It's design was suggested by the Island Council in 1980 and officially approved by Queen Elizabeth II in 1984 and flown for the first time in May of that year during a visit by the then Governor.

And that's the Pitcairn Islands! Remember, until next time keep your flags flying- FREAK or otherwise!