This Week In Vexillology #243

January 13, 2018
This Week In Vexillology, we're heading over to Africa, but not for another trip into our 'lost' archives, but for the flag of MOSOP or the Movement for the Survival of the Ogoni People. Here's what their flag looks like: 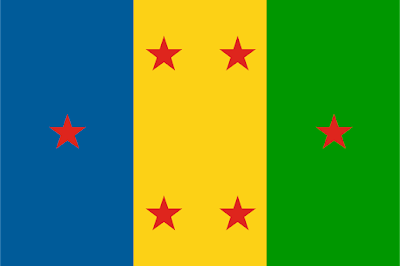 The Ogoni people live in the Niger Delta in what today is the Rivers State along the coast of Nigeria just east of Port Harcourt. Why do they have a movement and a flag? Well, back in the 1950s Royal Dutch/Shell found a commercial viable oil field in the Niger River Delta and began oil production. Normally, you wouldn't think that would be all that much of a problem beyond the normal risks for oil spills and other nonsense, but then, there's this- according to Wikipedia, between 1976 to 1991 there were reportedly 2,976 oil spills which amounts to about 2.1 million barrels, but the horrifying part is that those spills in this area alone accounted for about 40% of Royal Dutch/Shell spills worldwide.

Thanks to such environmental neglect, five decades of oil production has devastated the region- I hate leaning on Wikipedia so much, but I'll quote directly from them here:

In a 2011 assessment of over 200 locations in Ogoniland by the United Nations Environment Programme (UNEP), they found that impacts of the 50 years of oil production in the region extended deeper than previously thought. Because of oil spills, oil flaring, and waste discharge, the alluvial soil of the Niger Delta is no longer viable for agriculture. furthermore, in many areas that seem to be unaffected, groundwater was found to have high levels of hydrocarbons or were contaminated with benzene, a carcinogen, at 900 levels above WHO guidelines.

In general, it sounds absolutely terrible and therefore is unsurprising that a movement to protest these conditions and the general awfulness of oil production in the region would spring up (and have it's own flag.) MOSOP was founded in 1990 by Ken Saro-Wiwa and currently is an umbrella organization of 11 member groups that represent more than 700,00 indigenous Ogoni. They mandate the use of non-violent methods to promote democratic principles in their campaign for social, economic and environmental justice in the Niger Delta region.

Saro-Wiwa was tried by a special military tribunal for allegedly masterminding the murder of pro-government Ogoni chiefs and hanged by the military dictatorship of General Sani Abacha.(I actually vaguely remember the international outcry over his execution, though because I was 12 years old at the time, I don't think I really understood why it was a big deal.)

In the course of writing this post, I've been sort of scratching my head over how I found this flag and what possible connection it could have to the month of January: turns out Ogoni National Day is celebrated on January 4th.