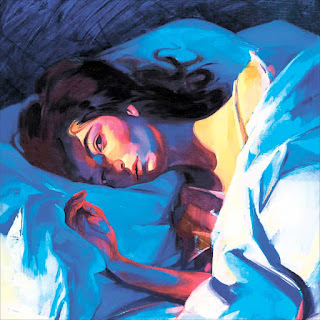 The end of a year usually brings with it multiple 'best of [insert year here]' lists, so for this month I went down the rabbit hole of a couple of 'Best Albums of 2017' lists before finally deciding to give Lorde's album, Melodrama, a listen. I was, of course, familiar with Lorde thanks to her hit single 'Royals' (which was apparently inspired by an old photo of George Brett of the Kansas City Royals, which is a fact that still tickles me to this day.) I had not, however, given a full album of hers a listen and as everyone who knows more about these things seemed to think that this album was pretty awesome, I gave it a go.

Melodrama opens with 'Green Light' which is seems kind of an odd start to the album, but grabs you with the chorus ('I'm waiting for it/that green light/I want it') and pulls you into and once you're in, you're in with this album. The next track that grabbed my attention was 'Homemade Dynamite' which is an interesting concept in and of itself (can one actually make homemade dynamite?) but it also was an interesting shift in tone for the album. 'Green Light' is more of an 'electropop' sort of an opener, while this seemed more of an almost hip-hop flavored track, which was nice.

In fact, if there's an interesting aspect to this album, it is that shift in tone. Lorde can go from electropop to mournful ballad with 'Hard Feelings/Loveless' and have a little fun with tracks like 'Perfect Places' and 'Writer In The Dark.' Reading through the wiki-page for the album, a little more about the concept behind it gets fleshed out. The money quote:


It explores the theme of solitude, in the framework of a single house party with the events and moods than entail it.

That sentence pretty much makes this entire album make perfect sense to me. There is a lot of solitude, grief and loneliness running through this album, but it's not a sad album per say- just sort of a, I don't know- the word 'ennui' keeps springing to mind. I think it sort of fits an early adulthood kind of a mood perfectly- you're not in college anymore, you've got worries, you're out on your own. You're dealing, appropriately enough, melodrama. (At least some of the time.)

(Random wiki-rabbit hole: Lorde apparently has a neurological condition called sound-to-color synesthesia, which means when she hears certain notes, colors appear. She talks about out in the third 'graph of this NY Times article, but my mind is still kind of blown about how her process would even work or what it would even be like.)

My favorite track on this album is probably 'Perfect Places' because it kind of reminds of a little bit of that Natasha Bedingfield song, 'Unwritten.' I have no idea why, but there was a summer where I was mildly obsessed with that song- it was my mood booster in a year where I sort of needed a mood booster more often than not. 'Perfect Places' takes me back to that summer a little bit and I like that.

Overall: my first Lorde album was an awesome experience. I can see why this one made so many 'Best of' lists for last year and I'll probably give her next album a listen as well. Would I buy this album? You know, upon reflection, I think I probably would. It's pretty good. My Grade: *** 1/2 out of ****.