This Week In Vexillology #219

July 08, 2017
This was supposed to be the 'July 4th Special' for this year but it didn't quite fall on the holiday, so we're going to do it the Saturday after and just say it counts. We went to Colorado on vacation this year, so it should come as no surprise that This Week In Vexillology, we're going to feature the flag of Colorado! 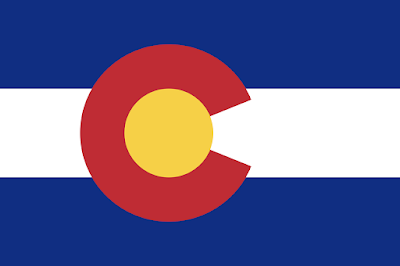 While I didn't succeed in my goal of finding a flag of Colorado while we were in Colorado, I did get a super cool Colorado flag thermos that I plan on drinking coffee and other hot beverages out of as soon as I get the opportunity. (Hey, flag swag is just as good as an actual flag, right?)

Before we get into the nitty-gritty of the flag of the Centennial State though, we gotta talk about that infamous 2001 NAVA Survey. Colorado ranked 16th. I'm sorry, but that is way too freakin' low. I mean, don't get me wrong- it's not bad. It's not a total miscarriage of justice, but it's still, way too freakin' low. The NAVA Survey looked at Canadian Provinces, US Territories and all 50 states and D.C. so the sample size is a little bigger, which I'm willing to make allowances for. But honestly: in terms of state flags, Colorado ranks right up there with New Mexico, Texas, and Arizona as iconic flags of state vexillology.

So, let's look at the 15 flags NAVA thought were better than Colorado's. DC and South Carolina no way should be ranked above Colorado. California should be ranked higher as well. Personally...  I'd probably put Colorado at #5, Cali at #8 and slot Alaska in at 13 and DC at 16. This is just too recognizable a flag and it's just too well designed. It commits none of the usual sins of the state flags- it's not a seal on a bed sheet. It's simple. The number of colors is low and the fact that the 'C' is slightly off center makes the design clean and instantly recognizable. (At least to me, anyway- and you know what, isn't it about time for another NAVA Survey anyway?)

The elements of the current flag have been around since 1911, but it was adopted in its current form in 1964, which makes it a relatively recent flag as state flags go. In terms of colors, the blue represents the skies, the white for the snow capped mountains, the gold for the sunshine in the state and red for the color of the Earth. The red-yellow combination of the 'C' stands for the colors of the Spanish Flag which used to own Colorado way back in the day. (While I'm assuming that the 'C' stands for Colorado, I haven't found anything that explicitly states that yet.)

(Another thing that I noticed about Colorado: the sheer number of flavors of license plates they have. The Missus and I spent our travels across Nebraska playing the license state game (the Elder Spawn is probably a year or two away from really getting into it) but our progress slowed down considerably once we hit Colorado because of the sheer different types plates we kept coming across. (That didn't stop us from picking up both an Alaska and and a Hawaii for our tally though.))

Meanwhile, until next time, keep your flags flying- FREAK or otherwise!