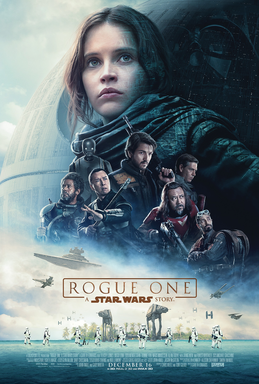 I wanted to try and get to see this movie in the theaters last year, but never got around to it- so I was very excited indeed when it showed up on Netflix and watched it pretty much as soon as I could find a minute or two and wow, did this one live up to the hype and then some.

Set just before Episode IV: A New Hope, Rogue One is essentially the story of the plot to find and steal the plans to the Death Star, which, as all the world knows by now is what triggers the events of the original film trilogy. The movie opens with Imperial Weapons Developer Orson Krennic (Ben Mendelsohn) finding research scientist Galen Erso (Mads Mikkelsen) who has been in hiding with his family on the planet Lah'mu. Krennic wants Erso and his family to come back to Imperial service to help him finish building the Death Star, which the Empire is hoping to use to crush the nascent Rebel alliance. Erso declines, but when his wife is killed he is taken by force- though his child Jyn escapes and is eventually delivered into the care of Rebel extremist Saw Gerrera.

Flash forward fifteen years and when an imperial pilot defects with a message from Erso about a purported flaw in the station, Rebel Intelligence agent Cassian Andor (Diego Luna) tracks down and frees Jyn Erso (Felicity Jones) from a labor camp before taking her back to the Rebel Alliance where she is convinced to track Saw Gerrera to see if the message is legitimate. Turns out it is, but then the Death Star shows up and with a low powered shot takes out the capital city and they barely get out ahead of the blast. Back at Rebel Alliance headquarters, a raid on Eadu to retrieve Galen is authorized- but that to goes to hell in a handbasket and Erso ends up dying in his daughter's arms.

The Rebel Alliance at that point thinks things are hopeless and is prepared to pack it in until Jyn and Cassian get a team together to launch a commando raid on the planet Scarif where the plans are being stored in the data storage facility- when the Rebel fleet hears that the raid is underway, the Battle of Scarif begins and eventually ends with a very familiar ship fleeing an equally familiar Star Destroyer.

Wow, where to begin with this movie? First of all: Darth Vader is back and he is a bad ass evil Sith Lord in this movie. I dug it. Second of all: I feel like this (along with Clone Wars and Star Wars Rebels) should have been what the prequel movies were about. We got to see the diversity and vastness of the galaxy that's far far away in this movie in ways that did not feel contrived. There was a real 'street level' feel to a lot of these planets that we visit- there are dirty back alleys and hidden bases and urban street fighting. It's a different and altogether excellent side of the Star Wars Universe that I really hope we see a lot more of.

There's a grittiness to this that feels very real as well- it's not all laser blasters and space battles- you see the real costs of what the Rebels are putting on the line in a way that makes the conflict running through the entire franchise suddenly come alive- ditto with the Death Star: it was menacing in the original movies, but here it's a weapon of incredible mass destruction.

(Spoiler-ish Things: Peter Cushing is kind of in this movie as Grand Moff Tarkin. If you're curious as to how that happened, given the fact that he's been dead since 1994, check this out. The ending kind of chaps me a bit though- the plans get frantically passed along to a very familiar ship which launches from the disabled Rebel flag ship after the battle. If Bail Organa thinks that Princess Leia is so important, why does he end up putting her in the middle of battle? I get it- and I like how it's done, but it also bugged me a little bit. Almost felt too neat, you know?)

Overall: Less of a prequel than more of the perfect prologue to Episode IV, Rogue One is a dazzling and ambitious expansion of the Star Wars universe. It's an excellent movie, it doesn't hang about and keeps the action moving and is in general, one hell of a fun ride. ***** out of *****