July 01, 2017
We're back and a good thing too, because it's time for our neighbors north of the border to have their moment in the sun- yes, it's Canada Day, so that means Canada Flags! We're staying east this year and first up, we've got the flag of New Brunswick: 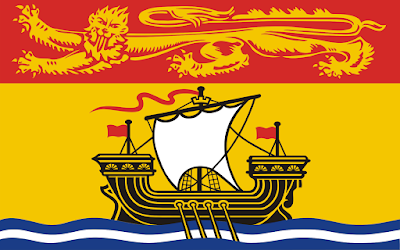 Adopted on February 24th, 1965, the flag of New Brunswick is a banner of arms (an armorial banner?) modeled after the Coat of Arms of the province, but what an dive into the Wiki-Page of the flag reveals is how much the design was driven by the other big vexillological change at the time in Canada- namely the replacement of the Canadian Red Ensign with the maple leaf we all know and love. People liked the Red Ensign and there was a lot of nostalgia for it in Canada which lead to modified versions of it being adapted as provincial flags (Ontario, Manitoba) and the parliamentary opposition at the time had planned to table a motion to adopted the Red Ensign as well, but then Premier Louis Robichaud had a different idea. New Brunswick, you see, had been settled by both the French and the British over the years and despite the expulsion of the Acadians, many had returned and there was a sizable Acadian minority in the province. Wanting to avoid something 'too British' as it were, they went with the armorial banner and it's actually pretty cool.

The gold lion in the upper third is taken from the arms of England or the Duchy of Brunswick-Lunberg ('Old' Brunswick) The ship in the bottom third could evoke the historical industry of ship building or the ships utilized by Loyalists to flee to New Brunswick after things didn't go their way in the Revolutionary War. (NAVA Survey Says: #18 out of #72...   I feel like that could be higher.) 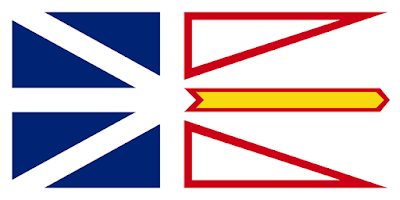 Next up, we've got the flag of Newfoundland and Labrador! Adopted on June 6, 1980 there's a lot of broad symbolism behind this flag. The blue color represents the sea, the white stands for (surprise, surprise) the snow and ice of winter, the red represents the effort and struggle of the Newfoundlanders and Labradorians (woof, those demonyms) and the gold stands for the confidence they have in themselves and for the future.  The blue triangles are meant as a tribute to the Union Jack and stand for the British heritage of the province. The red triangles are meant to represent the two areas of the province- the mainland and the island. The gold arrow is pointing toward a 'brighter future.'

Here's the cool thing about the flag of Newfoundland and Labrador: you can hang it as a vertical banner and when you do that- the gold arrow becomes a sword, honoring the sacrifices of Newfoundlanders in military service- it joins with the red triangles to form a trident, which represents the province's dependence on it's fisheries and the resources of the sea. 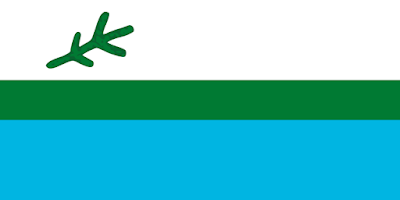 Finally, we've got just the flag of Labrador! It's unofficial- but used to represent the mainland of Newfoundland and Labrador since 1973. The symbolism is pretty basic: the white (surprise, surprise) stands for snow, the blue stands for the waters which serve 'as a highway and sustain of the people of Labrador'- the green bar is the nurturing land and it's smaller than the others because well, the summers are shorter. The twig is where it gets interesting. It's in two year growths: the inner twigs stand for the hardships at the past, while the outer ones are for the hope for the future.  The three branches in between for the three nations of Labrador: the Innu, Inuit and the white settler. The branches coming from the single stalk represents the unity of the peoples.

So, that's Canada Day! Remember, until next time, keep your flags flying- FREAK or otherwise!