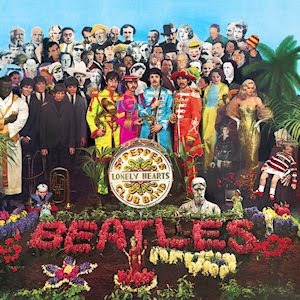 Sgt. Pepper turned 50 this year, so naturally, we had to include it on the list at some point. While I like The Beatles and went through a period early in my undergraduate years where I listened to a ton of their stuff. (I think it was a combination of the release of Anthology in the mid-90s and the hoopla around that and then '1' dropped my freshman year of college.) I'm pretty sure that I saw A Hard Day's Night and I know Mom had Rubber Soul in her stack of CDs... but other than that (oh and maybe listening to Abbey Road and The White Album at least once a piece) I wasn't really all that much into The Beatles. (Except this paragraph makes it seem like I totally was.)

But Sgt. Pepper was one that I hadn't sat down for in awhile, so I dug it up on Spotify and gave it a whirl. The first thing that stands out is the running time. This is a relatively quick album- coming in at 39:52 but the other thing that stands out is how seamlessly it all fits together. I'm assuming that was part of the whole 'concept album' thing that they were going for it, but it moves things along at a pretty brisk clip.

The albums opens with the title track and then moves into 'With A Little Help From My Friends' (the original far less bombastic and grandiose than Joe Cocker's cover) and 'Lucy In The Sky With Diamonds.' The opening trio are song that I'm familiar with, love and hadn't heard in awhile. So listening to them was like getting together with old friends again. The pleasant surprise was track four: 'Getting Better' which was a song that I had almost forgotten about but still worked just fine for me. (It's actually one of my favorites, because, well, the sentiment works for me. "You've got to admit, it's getting better. It's getting better, all the time." which is the kind if optimism we could use more of these days, I think.

Things slow down a bit with 'Fixing A Hole' and 'She's Leaving Home' but pick back up again with 'Being for the Benefit of Mr. Kite!' who joins Rocky Raccoon, Mean Mr. Mustard and Polythene Pam as memorable characters that have spring to life in the music and lyrics of the Beatles. 'Within or Without You' gets all mystical and is a pleasant change of pace for the atmosphere. The time the band spent in India is on display here with sitars and tablas going full throttle. Then the gentle but fun 'When I'm Sixty-Four' is followed by 'Lovely Rita' (another one for The Beatles and their character compendium) and then 'Good Morning Good Morning', a reprise of the title track and the glorious ending to it all, 'A Day In The Life.'

(I bear a minor grudge against the last song. It was used in our high school graduation slide show and while it worked well enough, we were the graduating class of 2001 and we should have used the theme from 2001: A Space Odyssey somewhere in there, damn it. But I have only myself to blame- I didn't speak up and suggest it. So really, it's sort of my own fault.)

Overall: The wiki-page on this album alone is worth a visit and well, it's The Beatles. It's really hard to find something bad to say about any of their albums, but this one jumps right up to Abbey Road and The White Albums in terms of importance and sheer excellence in my book. If  you like The Beatles, you've undoubtedly listened to this one a time or two. But if you haven't gotten around to it yet, then what are you waiting for? **** out of ****