July 12, 2017
Operation: Purge is underway in our house and things are moving at a delightful speed. We got a bunch of stuff out of Mom and Dad's basement and we sorted that out and we cleaned out all the boxes in the basement, I got a bunch of books purged and in general, there's less clutter and right now that feels good. It's going to be nice to streamline and simplify things and both The Missus and I are excited to get this massive project underway. Less toys. Less crap. Less boxes. Less stuff over all. It's a good feeling.

It's also lead to the discovery of some interesting treasures: 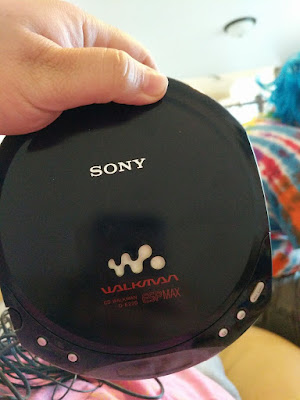 (There's a lava lamp in an 'as yet to be opened' tote that I'm looking forward to unpacking.) But the real prize was the collection of binders that apparently contained everything that I've ever written dating all the way back to 5th Grade. Yes, you read that right. I found a bound collection of Myths that we all wrote back in the 5th Grade. I found anthologies from a variety of writing projects in the 9th Grade, some truly cringe worthy editorials from the 10th Grade. An out of control draft novel that I'm pretty sure came in around 50K words that I turned in for a project in the 11th Grade. (I'm still not entirely convinced that Mrs. D (then Ms. G) read it. I think she probably just flipped through it, took a big pull off of her wine glass and gave me the A. Which saved my bacon in the wake of The Color Purple Fiasco.)

I got really excited when I saw some Rhetoric papers and was really hoping that I had saved some actual academic work other than my Master's Thesis, but no- it was Creative Writing class- literally every copy of every draft I handed out for people to read and their reaction notes. Dear God, that was a lot of paper- but it was actually kind of cool, because the piece in question became the final pages of The Prisoner and The Assassin. It was in my brain since the undergraduate years and guess what? I made it happen. I brought it to life. I finished that book. (It's a bit of a rough diamond, but it's out in the world- my personal book/writing plan, lodged somewhere on Google Drive calls for me to revise, polish and repackage both books in the next few years- with professional, shiny covers. But we'll see if I get there.) I've got to crack the book in front of me first and get that written and then there's the little matter of getting myself back to school as well.

This week has been ghosts of my youth. Vacation had be wondering about what happened to all the things that I used to love to do as a kid. And then I fell down the rabbit hole of a wonderful website called Classic Reload. All the computer games I loved as a kid available to play for free online. I played some freakin' Number Munchers, man! Civilization, Sim City 2000, Warlords, Spectre (but not Spectre Supreme, which was my jam back in the day) and 'Vette. I never had a gaming system when I was growing up, but I had these games. It's amazing to see them again. It's even more amazing to play them again. (Warlords, man. The original Warlords remains incredible...  Elvallie, The Orc of Kor...  all the favorites.)

It doesn't have all the games, of course. (Though Prince of Persia and Where In The World Is Carmen San Diego? are on there, games like Glider, Glider Pro and the Marathon first person shooter are absent.) But way way back in the day, I was all about these games. I could have been a gamer, but at a certain point, the graphics and the technology got too good and the games just moved to a level of complexity that just didn't do it for me any more. And eventually I moved away from them. I didn't get into Warcraft or Command or Conquer... I just sort of stopped playing computer games and I don't really know why.

Just one of the many questions I'm relieving from my misspent youth. All of course, thanks to the grand purge of the basement that's currently underway.