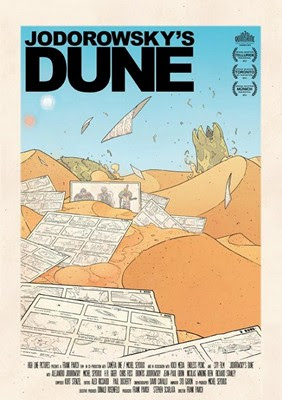 I've been keeping an eye out for this documentary for awhile, so I was excited beyond belief when a r/documentaries over at Reddit threw up a link that took me to Hulu and this amazing documentary. For those that don't know: before David Lynch made Dune, which I think more or less everyone agree was less than good- though I'll totally cop to sitting down and watching it for a bit whenever I find it on television, a guy by the name of Alejandro Jodorowsky had this massive, crazy idea to do a film adaptation of Dune. It would have been either a. amazing or b. batshit lunacy but it's a movie that I would have loved to have seen, despite the liberties it took with the book.

Jodorowsky hailed from Mexico and got his start in independent, avant garde film. I'm not an expert in that particular genre of film, but from what the documentary showed of his early films, they were either pretty trippy or beautifully strange, which seemed like an ideal combination for adapting the work. He partnered up with French film producer Michel Seydoux and set about designing and planning his sprawling, epic adaptation of Dune.

He got HR Giger, Chriss Foss, Jean Giraud to start designing concept art, set and character design. (HR Giger went on to create the xenomorph from Alien, if that named seemed familiar.) He wanted Pink Floyd and Magma for the music. He wanted Salvador Dali for the Emperor, Orson Welles for the Baron Harkonnen, Mick Jagger for Feyd Ruatha and that was just the start of the fun.

The script eventually ballooned to the size of a phone book and would have made a 14 hour film- the concept art (which they turned into a book which is referenced and shown throughout the documentary) is a book that was equally as large and apparently there are only two left in existence, because I would buy that thing as a coffee table book without hesitation. (Maybe not right this second, but you know, when the kids get older and we can do coffee table books and the like.) Despite the liberties he took with the script (Arrakis itself becomes sentient and flies away through the galaxy or some such thing.) it would have been a crazy-ass movie to actually watch.

Unfortunately, just getting it off the ground was a hideously expensive process and nobody wanted to spend the money to get it made. All the studios passed and then the money couldn't come together and then in 1982, the film rights lapsed and Dino De Laurentis picked them up, handed 'em to David Lynch and that's how we got Dune, circa 1984.

But here's the crazy about this movie that never got made: it's fingerprints are all over a ton of movies. Obviously, with H.R. Giger, you have the Alien Franchise. Concepts from the movie show up in The Terminator. Tracking shots described by Jodorowsky show up in movies like Contact. Blade Runner too! It never got made, but the ideas packed into this movie helped influence a decade or more of some truly excellent science fiction films.