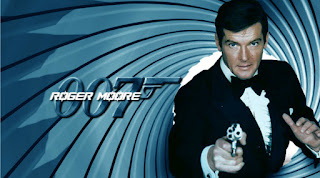 (Apparently the addition of a fourth movie to my tally created some formatting problems, so if this post looks a little awkward, I apologize.)

Last month, before we headed out on vacation, I spent some time building a fort out of newspapers and watching the rest of the Bonds of Roger Moore- so without further ado, here's Part 2 or, as I like to call it, "The Best of the Rest."

First up, was For Your Eyes Only. Any movie that has Topol in it is going to be a good movie- and if you throw in Julian Glover to boot, you move up a peg or two in my eyes. I was honestly surprised that it scored a 74% on Rotten Tomatoes though, but upon further reflection I think that's about right if you think about it. When a British spy ship sinks in the Ionian Sea, a critical system (ATAC) which is used to coordinate and communicate with the Royal Navy's fleet of Polaris missile submarines is compromised and Bond finds himself in a race with the Soviets to retrieve it. The British initially ask a marine archaeologist, Sir Timothy Havelock to investigate but he is killed by a Spanish assassin, which gives Bond a place to start. Unfortunately, Sir Timothy's daughter vows revenge as well, so Bond has to keep her from killing important people he needs to talk too, fend off the advances of an amorous figure skater before a final showdown at a mountaintop stronghold.

Cold open Bloefold-ish shenanigans aside, this one actually holds up really well. I'd probably slot it in behind The Spy Who Loved Me and Octopussy as one of Moore's best outings. There's the requisite action set pieces and the whole figure skating thing aside, the end where Bond throws the ATAC over the cliff and tells Gogol, "That's detente, Comrade. You don't have it. I don't have it," is just about perfect. (Interestingly enough, Cassandra Harris, who plays the Countess Lisl was future Bond Pierce Brosnan's first wife.)

Next: A View To A Kill. Let's get this cleared up right away: best Bond song hands down. It's not even a contest, but as Bond movies go, it's... less good. Roger Moore was 57 when this one was filming and it showed. Christopher Walken is good as Max Zorin. Grace Jones is interesting but underused and Tanya Roberts always grated on me a bit as the main love interest. Patrick Macnee being in this one was delightful as it meant that both Mrs. Peel and Steed made it into a Bond film, which seem like it was worth noting. I was just never honestly sure about Zorin's Master Plan about pumping water into the fault to cause an earthquake...  it stretched credibility a bit. Super villians are part and parcel of Bond- I get that. But plans either need to be grounded (selling fake jewelry to fund arms sales in an attempt to provoke World War III) or batshit crazy (let's all live in space! Let's all live under the sea!) and unfortunately Zorin lies somewhere in the middle and doesn't quite work for me.

Third up, Moonraker. Okay...  fact I didn't know about this movie: it was the highest grossing entry in the series until Goldeneye rolled around in 1995. And to be honest, I actually ended up liking it better than I remembered. The space stuff actually kind of worked and Drax, as a villain actually had a dry, understated sense of humor that suited the character perfectly. Sure, he was going to eradicate humanity and create a new master race, but that didn't mean he wasn't ready with a suitably dry observation or quip. This movie marked the second movie we see Jaws (Richard Kiel) as a henchman and while he still packs a punch, he's lost some of the menace he had in The Spy Who Loved Me. Similarly, Bond's attempts to come to grips with feminism fall painfully flat, as poor Dr. Holly- a strong, capable, potentially well-rounded female character in a franchise bereft of them- gets saddled with the unfortunate last name of 'Goodhead' and ends up swooning for James by the end anyway.

I'm seriously still kind of stunned that this was the highest grossing Bond film until Goldeneye.

Finally, the best of Roger Moore's run: The Spy Who Loved Me. When both British and Soviet submarines start disappearing Bond is summoned to investigate, dodging a Soviet hit squad in the process and killing their leader. A submarine tracking system is being auctioned of in Egypt and Bond heads there only to find that his Soviet counterpart, Agent Triple X is bidding as well. The two join forces, dodging Jaws along the way. The trail eventually leads to Karl Stromberg, who has a marine research base off of the coast of Sardinia where he is plotting to start a nuclear war between the two superpowers and go live under the sea.

Bond and Triple X storm the base, take care of Stromberg, free the submarines and their crews and blow up the whole kit and caboodle as they do so.

The cinematography on this one is what stands out. It's probably the most beautiful looking Bond film- especially the sequences in Egypt. Bond finds an able foil in Agent Triple X and despite the inevitable romance between the two, Barbara Bach holds her own with Roger Moore and seems awfully willing to kill him for most of the film. The theme song is awfully strong- ranking right up there with 'Live and Let Die' and 'A View To A Kill.' This is peak Roger Moore and is probably the best of his movies and along with Octopussy probably his contribution to the James Bond Hall of Fame, as it were.