Whither The Art Museum?

March 09, 2016
I'm a little behind this week...  I need to finish a book so I can review it and I was going to write another post about, well, work, but I'm still massaging that a little bit. Happily, some late breaking news this afternoon provided a topic to delve into.

The University is pulling out of a public-private partnership that was set to develop the Hieronymous Square area downtown (finally! At long last!) and give the University of Iowa Art Museum a new permanent home. Which is a bummer, because that was a really, really good location for a new Art Museum. Which now opens up the question- now what? Where does the Art Museum go? And does this delay a return of the Museum or even make it less likely?

Well, I think the Museum is still coming back. University officials are re-affirming their commitment to getting the place a new permanent home and you know what? Reading that article, I'm not sure the timeline is going to be adversely affected either. I have a feeling that there have been some behind the scenes conversations that lead to this change of direction- they're not going to pull out and eat the development costs unless they've got another idea of a direction to go to begin with.

But where does it go? Here are my theories:

1. The Menard's Option: I think this might be a little too far away from Campus to be very likely- but it does have some benefits- not least of which is a ton of free parking. Plus, you've got an existing building to work with and more space than you would know what to do with. Plus, Google Maps seems to think it's a done deal- maybe they know something we don't? 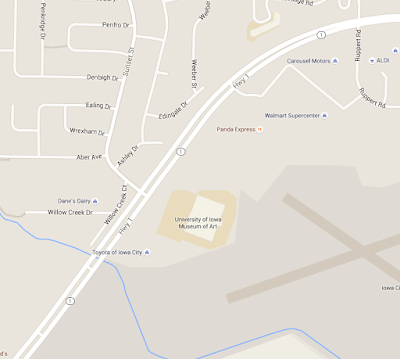 2. The Hawk Shop Outlet Option: down on Gilbert Street, there's a sizable building which currently houses the Hawk Shop Outlet. Again, this one is a little too far from Campus for me to believe it's a likely option- and it's proximity to both Ralston Creek and the River might be an issue as well, but it is in the heart of what the City wants to turn into the Riverfront Crossings District. A renovated or even a new facility at this location could, if designed correctly, be one hell of a draw for a changing area of Iowa City.

3. The Old Capitol Mall Option: I like this one the least, but it might be on the table again. There's a ton of space opening up on the 2nd Floor of the Mall- which is entirely owned by the University and it could be converted easily into a very nice, decently large space without too much fuss, I think. There's parking already attached and plenty of places to eat downstairs.  It could easily turn what used to be the premier mall in the area back into a destination venue instead of a walk through area.

4. The Ann Cleary Option: This intrigues me, because it could potentially be the most awesome option of all. Follow me around on this: the WRAC House is done in it's current location. Halsey Hall is home of the Dance Department, who has long coveted the old Art Museum building, which is tailor made for gallery space, etc. The IMU Ramp, which was the first parking ramp built on campus and well past its prime- not to mention the fact that's it's universally hailed as a truly awful parking ramp. So what do you do? Gut Halsey and move the Dance Department across the river. Demolish the IMU Ramp and then build a new parking ramp across the entire length of that block (from WRAC to where Halsey is now) and build a Museum on top of it, with an entrance out onto the Ann Cleary Walkway. As an option, it's a little complicated, but it would revitalize that area of campus- but the new Art Museum in the same neighborhood as the other Pentacrest Museums and be smack dab in the middle of campus, with what I'm sure would be pretty stunning views of the river.  My only thing? Seems like it would be costly.

The strange thing is, that after reading the article, I have a feeling that they've got a totally different concept in mind. I just don't know what it is yet...  but I can't wait to find out.