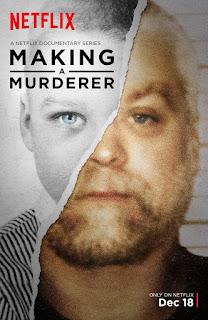 It's been about a month or so since the Missus and I finished up watching Making A Murderer on Netflix and I'm still honestly not sure what I'm supposed to think about it or even what the point of it all was. Was it meant to be a portrait of how the criminal justice system can fuck up in a major way in this country? Or was it meant to show how the presumption of innocence is impossible when prosecutors can try their case in the media if the murder is shocking or lurid enough- or hell, was it even an attempt to show that the defense in a case can play that game as well? Was it supposed to be a portrait of how the criminal justice system can screw poor people in a major way if it wants too? Or did the filmmakers actually believe the story of Steven Avery?

Making A Murder is a 10 episode documentary that looks at the case of Steven Avery- who was sent to prison back in the 80s for a sexual assault that it turns out he didn't commit- he was, in fact, exonerated and released. Once he was released- as there was fairly substantial evidence to suggest that the Manitowoc County Sheriff's Office knew he was innocent and ignored the evidence- he sued the Sheriff's Office and just before the trial was set to be concluded, Avery was arrested and charged with another murder.

Whether you believe that fact was coincidental or convenient probably shapes how you view the rest of the documentary.

Thinking about it, I don't think there's any doubt that Avery got royally screwed in his first case. The Manitowoc County Sheriff's Office screwed it up- whether out of malice or personal vendetta, as the documentary suggests or through general incompetence, I don't know. I do know that the tension between the City Police Department the Sheriff's Office felt very familiar to me- that sort of push back and forth/vaguely political rivalry between the two was portrayed in a way I could easily believe.

The fact that the Sheriff's Office was dead sure they had that guy also was unsurprising. I think every agency has that 'one person' or 'frequent flyer' they deal with so often that the risk of falling into the trap of confirmation bias can't be overlooked. (Just because it's usually that guy doesn't mean it's going to be that guy every single time.)

So yes, the sexual assault that sent Steven Avery to jail the first time was a mistake. He deserved to be exonerated and yes, he deserved to have his day in court. The first episode, which covers the background and the story of the first case is just fine. Outrage level: high. It's the subsequent episodes where things started to get dodgy for me.

At first, I was right on board with the filmmakers. This was way too coincidental and for the longest time, there wasn't even the hint of a motive. (Turns out some key evidence got left out, per Wikipedia) but as time went on, I found myself wondering what I was missing. It made no sense- Avery had access to a car crusher. Why didn't he just crush the car? How the hell did his nephew get involved in all of this? What wasn't I being told?

And that's where I sort of got off the bus. While it was probably impossible for the filmmakers to have told a compelling story of both trials effectively (there's a TON of witnesses, hours of testimony, etc) it felt...  imbalanced. I started listening to the first season of Serial while I was doing this and the contrast was telling. Sarah Koenig delves into the case of Adnan Sayed but makes a concerted effort to hold onto objectivity when looking at the evidence. I feel like Making A Murderer lacked that. It wasn't about the flaws in the case or finding the truth one way or the other. There was an agenda here and I'm not sure what it was.

By the last episode, I wasn't buying whatever the filmmakers were trying to sell me. Could the controversy have been avoided? Sure. If I was the Manitowoc County Sheriff, I would have kept every last one of my officers away from that crime scene- I wouldn't have let them come within a mile of the police and if Calumet County needed extra bodies, the state or FBI would have provided them. I would have done my damnedest to hermetically seal my agency away from this case just to avoid the merest sniff of conflict of interest. Had Manitowoc attempted to do so (at least more than the series portrayed them doing) much of the controversy may well have been avoided.

Did the defense make their case? I don't know. If the standard they had to meet was reasonable doubt- I think they might have come awfully close to doing just that. And the points that Avery's lawyer, Dean Strang makes about presumption of innocence are thought-provoking and worthy of discussion: in our reality-television obsessed culture, is a presumption of innocence even possible any more? And if its not, can justice for anyone truly be achieved?

Overall: Thought-provoking, rage-inducing and ultimately troubling, Making A Murderer is a compelling piece of television. But, having been sucked into not one, but two seasons of Serial, I can say if you want to see True Crime done the way it's supposed to be done, listen to that instead. I'd say ** 1/2 out of ****