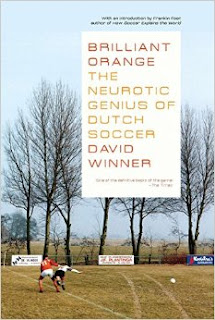 This book makes me want to visit Holland. There, I said it- and if you pick this book up expecting a book about Dutch soccer and Total Football and how it all happened, you'll get some of that with this book- but it's a rather unusual book in that it's not just about the history and the tactics and how it all went down on the soccer pitch. The author, David Winner wants to dig deeper and find out if there's something inherent in the Dutch national character or their national DNA that made the rise of something like Total Football an inevitability- and goes a long way to explain the Dutch inferiority complex/'always a bridesmaid and never a bride' that seems to bedevil them in major tournaments. Winner's thesis, therefore is something of a contradiction: the very same national DNA that produced some truly sublime moments of football is also the very thing holding the Netherlands back from winning a major tournament- and by and large, I think by the end of this book, I'm convinced that Winner knows what he's talking about.


True confession: I've always had a soft spot for the Dutch. I'm convinced that they are, without a doubt, the best soccer nation never to win a World Cup. (They've come damn close a couple of times- in 1974 and 1978 and more recently, in 2010- with a run to the semifinals in 2014.) One of the most brilliant goals I've ever seen was in 1998 when they were playing Argentina*:

And while this goal does get a mention in the book, it's worth noting that the goals I didn't know about kept me busy on YouTube over the course of this book. From looking up references to obscure Dutch painters I had never heard of, to a passing reference to a children's book that I'm pretty sure my mom still has somewhere, Mr. Google and Ms. YouTube were my best friends on this book. I spent time on Google Maps, scoping out street views of Volendam (home of Ajax's footballing brothers Gerrie and Arnold Muhren) and marveling that there were bike lanes even next to major freeways- and if you wanted too, you could, from what I could tell, cycle across the Markermeer from Lelystad to Westeinde if you really wanted too.**

The people I learned about were equally as interesting. Willem Van Hanegam had this unique way of kicking the ball with the outside/top of his foot that worked insanely well. Arie Haan scored a beautiful long range goal at the 1978 World Cup and who can forget Marco Van Basten's chip shot versus Russia to net Holland it's only major title to date, the 1988 European Title. And then, of course, there is the man himself, Johan Cruyff, who looms large in this book as both progenitor of the modern Dutch game and it's most reactionary critic in his latter days. (The Cruyff Turn. It's not his only highlight, obviously- but it gives you an idea of what the dude could do.)

The final third of the book produced some truths that jumped off the page at me. "When the national team is losing, their morale goes completely." (True. I remember watching the 2010 Final in a Bennigan's in Clear Lake and as it became apparent Spain was going to win it, you could see the Dutch players grow more and more frustrated and then get chippy- probably because they were merely trying to get the damn ball back.***) "Empty stadiums are very special." (Also true. Having done my share of Kinnick Stadium patrol over the years, there's something magical about an empty stadium. And if it's snowing, that's a double bonus.) But it's one of the last lines of the book that proved to be, weirdly, the most prescient of all: "Question of the 21st Century: where were you when Johan Cruyff died?"

That last one seemed especially strange given the fact that I was reading this book when news broke that he had died.

The Dutch, from a footballing perspective are on a bit of a downward swing now. They failed to qualify for this summer's European Championships for the first time since 1984 and you get the feeling that there are some rocky years ahead. The Dutch League, the Eredivisie has been overshadowed by the gargantuan money of the Premier League and the growing power of the Bundesliga. (Serie A, Ligue 1 and La Liga would probably all rank ahead of the Dutch at this point.) But if this book shows anything, it's that patience and cooperation- both national necessities for a nation literally built from the sea, whose survival depends on holding it back- can win the day. The Dutch will be back. They'll adapt and they'll get back to it- it's worth noting that Spain has been to 14 of 20 World Cups and has only managed to win one. England probably has similar numbers. So I think Dutch patience and perseverance will produce their long awaited glory at some point. It would be a shame it doesn't happen.

Overall: Fascinating book- not just from a football perspective. This book as I mentioned, makes me want to visit Holland and if my month of two 'soccer books' this one I found to be far more engaging than Das Reboot was. Winner is obviously enthusiastic about his subject and it shows. **** out of ****.

*I was happy to see Argentina lose because they had just eliminated England is one of the most tense, thrill-a-minute games I have ever seen. How did England lose? Of course- penalties!

**You can also go Den Oever to Cornwerd- across the length of the IJssselmeer as well- on bike. It's about 20 miles. I'm not sure why that blows my mind so much, but it does. Seems like biking across Lake Michigan or something.

***Lots of people loved Spain's win in 2010. But while tika-taka looked pretty, god damn could it get boring after awhile. So I sympathized with the Dutch and their frustration.