This Week In Vexillology #157

March 12, 2016
This Week In Vexillology, we're getting away from municipalities and back to countries- this time to wrap up the nations that make up what used to be Yugoslavia- last but not in any way the least, we've got the flag of Slovenia: 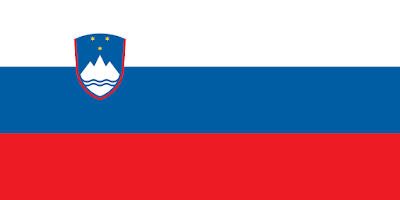 As with many of the other countries of the former Yugoslavia, Slovenia goes with the traditional white-blue-red that are associated with the Pan-Slavic movement, but in the case of Slovenia have a historical link to the coat of arms of the Duchy of Carniola. The Coat of Arms appears in the hoist side- the peak represents Mount Triglav, which is the highest peak in Slovenia. The wavy lines represent the Adriatic Sea and local rivers. The three six-pointed golden stars in the inverted triangle above the peak are taken from the Coat of Arms of the Counts of Celje, a major dynastic house of the 14th and 15th Centuries,.

The flag was officially adopted on June 25th, 1991- though the Slovenian tricolor was raised for the first time during the Revolution of 1848. In terms of the post-Yugoslav Era, Slovenia was first to head for the exits- with a movement called for independence starting in 1987 and culminating in a declaration of independence on June 25, 1991. Two days later, the Yugoslav People's Army entered the country and began what came to be called the Ten Day War, which culminated in the Brioni Agreement, which secured Slovenia independence.

(Slovenia sticks in my head a bit thanks to probably one of the most amazing Olympic Moments I've ever seen- winter or summer. In 2010, Slovenian Cross Country Skier Petra Majdic came off the course and fell down a ten foot gully at the edge of the course. She broke multiple ribs and seemed to be totally done- but somehow managed to fight back for a bronze. The fall- which you don't exactly expect in cross country skiing looked nasty as hell and I read later that one her broken ribs actually collapsed her lung before the final where she managed to get a bronze. So, she falls off the damn world, breaks ribs, keeps skiing and with a collapsed lung and broken ribs manages to score a bronze? Still the damnedest thing I've ever seen, six years later. You can see the fall in the first three minutes or so of this video- and you can see how much pain she's in as well.)