This Week In Vexillology #158

March 19, 2016
This Week In Vexillology, we're moving slightly north from Slovenia to the other half of the nation formerly known as Czechoslovakia...  that's right, this week, we've got the flag of none other than Slovakia: 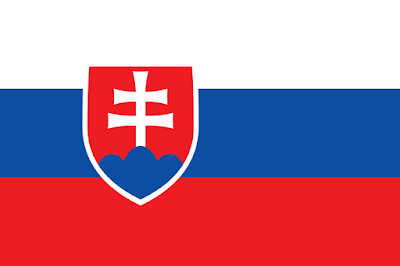 Adopted on September 3rd, 1992 as the national flag of Slovakia, what we see is pretty much what we've been seeing all over that portion of Europe. That's right- say it with me: PAN-SLAVIC COLORS! I want to travel back in time to 1848 and propose different colors at that pan-Slavic conference or whatever the hell it was because it makes all these flags so monotonous and boring. No kidding: if you take away the coat of arms, you know whose flag you have? Russia's.

So let's leave aside the color scheme and focus on the Coat of Arms. Adopted on June 1st, 1993- the double cross is a symbol of its Christian faith- one modern interpretation says it's represents St. Cyril and St. Methodius who brought Christianity to region from the Byzantine Empire way, waaaaaaaaay back in the day. (Specifically, the 9th Century if anyone is keeping score.)

The three hills represent the three mountain ranges in the northern part of the old Kingdom of Hungary- the Tatra, Matra and Fatra. (The Tatra and Fatra ranges are in Slovakia today...) The order of the 'heaps' and how they're interpreted dates all the way back to the 16th Century.

And that, ladies and gentlemen is Slovakia. Remember, until next time keep your flags flying- FREAK or otherwise!