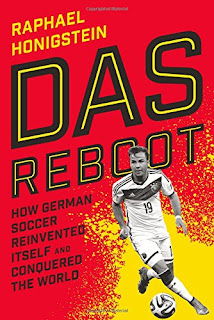 I brought this book after listening to a Men In Blazers Pod Special featuring the author, Raphael Honigstein- who also narrates this excellent documentary on F.C. St. Pauli. Why buy the book? You know, I'm not really sure...  I watch more soccer than I used to, so it just sort of made sense to me to learn more about the history and trends of the game itself and Das Reboot is a fascinating look at how a game can evolve and be changed from the ground up.

After a decline in the quality and results of the German game from 1998 onward- culminating in a disastrous turn at the 2004 European Championships, the best minds of German football sat down and began to figure out what had gone wrong with their game- in decades past, considered one of the premier football powers of the world- and how they could reach that pinnacle once more. The heart of Das Reboot: How German Soccer Reinvented Itself and Conquered The World is the reinvention that took place between that low point of 2004 to reaching the summit of soccer glory once again, ten years later- raising the World Cup for the fourth time in Brazil in 2014.

The tandem of Oliver Bierhoff and Jurgen Klinsmann laid the foundations for the revival that Joachim Low would carry to it's fruition in Brazil. Investment in youth development proved to be key- with Bundesliga clubs starting their own development centers and youth academies- but the Bierhoff and Klinsmann tandem went back to the drawing board and left nothing untouched. Coaching, training- it wasn't just a change at the top of the pyramid- the national team itself- no, they wanted to create conditions for sustained success in the future- and with the World Cup in Germany for 2006, they had plenty of motivation- and pressure on them to succeed.

A tactical revolution- which has been percolating upward since 1983 or so, also bore fruit, thanks to the efforts of Ralf Rangnick- whose zonal marking and 'four at the back' system slowly gained adherents and attention gradually- one of his disciples turned out to be the now Liverpool Manager, Jurgen Klopp- but the real blueprint and proof of concept for Rangnick's philosophy came when he took over as Manager for TSG Hoffenheim in 2006- a billionaire founder of SAP Software had brought the club in 2000 when it was languishing in the 8th Division and now Rangnick was being brought in to get them into the First Division- which he did. (How long they will stay there, I don't know- as currently, they're 17th in the table,)

The culmination of this reinvention took place during the World Cup in Brazil in 2014. Honigstein weaves the story of German's run to glory in between chapters that tell us how they got there, including every one of Germany's matches- including the one versus the USA (where Joachim Low faced down his predecessor, Klinsmann) and the one against Algeria (which brought back memories of the Shame of Gijon) and of course, the demolition of Brazil in the semifinal before it's final triumph against Argentina in the final.

Together, the story of Germany's World Cup in 2014 and the story of how they got there make for a thrilling, fascinating story that kept me turning pages and interested until the very end. If you're a soccer fan this is a must read. If you're a fan of creative thinking and the power of reinvention- this is a must read as well. After realizing that they could no longer rely on past glories to power them to success, Germany challenged every assumption about football they had and left no corner untouched to reinvent themselves in a bid to return to glory. They succeeded- and so does this book. **** out of ****.