This Week In Vexillology #300: A Cedar Rapids Flag Tease

January 25, 2020
Public voting doesn't start until April, but the Gazette yesterday gave everyone a little tease of some designs that had been submitted. I gotta say, the process seems a little convuluted: 218 design submissions so far (and why the Gazette didn't post all of them, I don't know- but they really should at some point!) and a group of professional graphic designers with a few members of the North American Vexillological Association are going to pull out common themes from their 218 designs for common themes and some how boil it all down to four final options for public voting.

Obviously, until we see the Final Four options, you can't really pass judgement-- but there are some interesting designs in this tease that are worth looking at I think. Here's what stood out for me. This one: 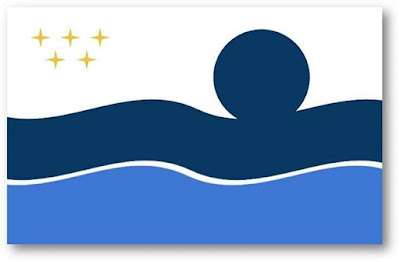 The 'graph that describes this one reads thusly:

"Midnight navy combines with a vibrant deep sky blue to depict the contunal motion of the Cedar River, a pivotal landmark that makes our city unique and one of a kind," the submission states. "In the upper left hand corner are 5 golden stars, each representing one of the 5 seasons of Cedar Rapids and the city's 5 star commitment to being of the best places in America for residents to live, work and play."

Look, we don't know if this is going to be one of the final four designs for Cedar Rapids- but of the six or so that the Gazette teased us with, this one stood out the most to me. I like the representation of the river- I like the combination of the blues. I also like the update to the whole 'Five Seasons' thing with the use of the stars in the upper left canton. As a flag for Cedar Rapids, it would represent a vast improvement on their current flag- but there's also the nagging feeling that this design doesn't quite make it to the end zone.

Any new municipal flag, especially in Iowa, has a problem. Des Moines has set the standard for our city flags. You look at it and you instantly capture the essence of the city in one flag. I'm not sure what the equivalent would be for Cedar Rapids, but I'm not sure this design quite hits it out of the park. It's really good, don't get me wrong- and maybe flags can come to represent a city over time- so maybe a design like this would be one to grow used too. But here's the thing: if you've ever been to Des Moines, you can look at their flag and instantly know that it represents Des Moines. What the equivalent for Cedar Rapids would be I don't know. It'll be interesting to see what the Final Four choices for Cedar Rapids give the public to look at...  but, if these early teases are anything to go by, if you're a Cedar Rapidian, it's time to get excited about your new flag.

(Also: Iowa City... when are we getting a flag? Oh, hey-- remember my proposal for a flag for Cedar Rapids? Here it is again for your viewing pleasure!)