Five Days Out: Some Caucus Thoughts 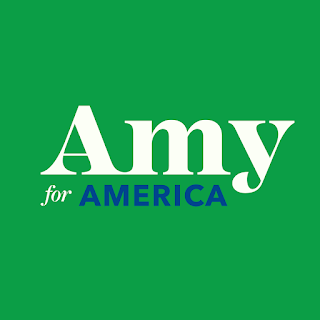 Look, if you've been following me on social media in any way, shape or form, it shouldn't come as a galloping shock to you that I'm planning on caucusing for Minnesota Senator Amy Klobuchar. I know she's the right choice for country and she'd make an excellent President. I'm not immune to the arguments about needing structural/radical change in this country, but I'm also tired of gridlock, I'm tired of Presidential candidates who promise the moon and can't deliver and I don't want four years of a Democratic President who governs with the pen, pisses everyone off and has it all undone in ten minutes or so as soon as the next Republican President is sworn in.

I want an effective legislator. Someone who is going pass laws and if they can't accomplish the big things, at least they can move the ball down the field instead of going three and out by standing up and pontificating about 'principles' or 'ideology.' Most importantly of all, I want a President who is at least going to try to be President for the whole country and not just the half that voted for her.

But here's the biggest reason of all: if nominated, I think Senator Klobuchar would win. And I don't think it'd be a particularly close win either. She would, as she's been saying for most of her campaign, 'win big.'

I don't believe in the two party system, in fact I actively loathe and despise it. Because I have two degrees in political science, I know that our 'first past the post' single member district structure tends to produce fewer parties instead of more, but every other major democracy with that structure has managed more than two parties. We're forced into this artificial binary that only exacerbates our growing sense of political tribalism. I voted for Ross Perot in the 4th Grade way back in 1992 and I've been a registered Independent (or as Iowa now charmingly calls it 'No Political Affiliation') ever since I was old enough to vote. I've come off the bench and switched registrations only once before. This would be the second time.

I've been banned from making political predictions since Election Night of 2016 which is probably a good thing, because five days out from the caucuses, I honestly have no idea what's going to happen. There's three scenarios I'm looking at.

First, the polls are more or less right. Sanders wins, Biden is right behind him, Buttigieg/Warren/Klobuchar battle it out for third.

Second, the polls are wrong. I have absolutely no basis to think that they are at this point, but at least report, I think something like 22% of likely caucus goers were undecided. If that number is still that high come Monday and the majority of them swing one way or the other, then yes, the polls as they stand now could be very wrong. In this scenario, who the hell knows who wins.

Third, the Uncle Joe question. Biden is a weird front runner. Maybe it's a side effect of living in Iowa City, which is so blue that voters have the luxury of looking at more boutique and artisanal candidacies, but I can probably count on one hand the number of Biden signs that I've seen around town. (Again, the 'Yard Sign Primary' is largely anecdotal, but I'd say, Bernie, Warren, Klobuchar, Buttigieg, Yang and Tulsi would be the significant amounts of signs I've seen.) I feel like there's a decent chance that Biden's been an ice cream cake this whole time. Looks potentially delicious, but if you leave it out too long, it's gonna get soft and melty. (Just to continue the analogy, it's also not everyone's cup of tea and you've got to be in the mood for it to really enjoy it and it's gotta be the right flavor.)

The first scenario is simultaneously the most and least interesting one of the three. Say it's Grandpa Bernie and his Magical Money Tree. He wins Iowa, New Hampshire- does he win South Carolina? Does the party line up behind Biden to stop Bernie? Does the party just accept that it's gonna happen and throws up it's hands and just deals with it? I don't know...  I do think if Sanders does get the nomination, you'd be foolish to think that he's going to lose. It would also be a death blow to the idea of the two party system in many ways-- if both major parties are lead by political 'outsiders'  who are just running under party labels, then do political parties even matter anymore?* I do have a feeling that if Sanders picks up enough steam and Biden doesn't seem to be able to slow him down, then that's how we end up with someone like Bloomberg, which is gross.

The second and third scenarios kind of blend together in many ways. Say Biden's support is soft. Where does it go? Who does that benefit? In some cases, I would think Warren more than Sanders, but if the 'moderate lane' shifts, it could benefit Klobuchar or Buttigieg as well. I also don't know how many undecideds are gonna go for Warren or Sanders. So if the undecideds break late for Klobuchar or Buttigieg....

*You could argue that Bernie isn't really much of an outsider anymore, but he does come across as genuine, authentic and at the very least consistent in his positions, all of which is going to be appealing to voters. So he's...  got one foot in the door, I'd say.