A Modest Proposal: A Flag for Cedar Rapids (Blue Diagonal) 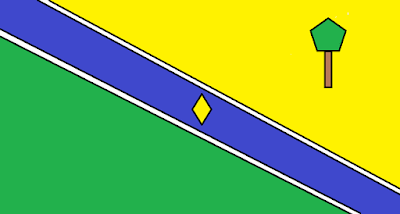 Okay, I should state at the outset of this that I am in no way, shape or form, a graphic artist. I did this in about a half hour using MS Paint so obviously, there are other better programs out there that could make this look even better than I think it does. (Granted, I'm a little biased here, but I think it looks halfway decent- and would probably look even better if I had an ounce or two of artistic talent.) So: if you haven't heard the news, Cedar Rapids is looking into getting a new flag, which naturally makes the flag nerd in me squeeeee with delight. There's no official design contest open as of yet-- so I have plenty of time to work up some more proposals or at the very least, make this one look a little better than it does.

But when KCRG asked the question on Twitter, this was more or less the initial concept that sprang into my brain. I think my official answer to the question was this:

A blue diagonal with a gold diamond in the center of it to represent May's Island. In the upper right canton, I'd have either the Lion of Bohemia or the Eagle of Moravia for the city's Czech/Slovak heritage and maybe the tree of five seasons in the lower left canton.
— Tom Nixon (@litcityblues) February 20, 2019

Between Bohemia and Moravia, I settled on Moravia, as historically it lies in between Bohemia and Slovakia, which made it seem like a nice bridge between the two-- but the color scheme is what immediately threw this initial notion off. This is the Eagle of Moravia: 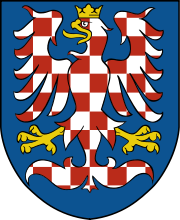 Multiple problems emerge immediately. If I want a blue diagonal with the gold diamond in the center of it-- then what do the other two cantons of the flag look like? Do I fimbriate the blue diagonal with something and then have a blue diagonal and a blue canton? Is that too much blue? Would a red and white checkered eagle look good on a background other than blue? How do the Moravians feel about this? Are there copyright issues I don't know about?

Basically, it posed too much of a design problem for me to overcome. Do I think you could use an eagle (maybe not this eagle) in another design and checker it red and white to represent the Czech and Slovak heritage of the city? I do. I might sit down and do some more research on it and work up a second proposal here in a month or two and do it right. But in this design, I just couldn't get it to work the way I wanted it too. So I dropped it...

I did some basic research into the history of Cedar Rapids-- I learned that Linn County isn't named after anyone in particular. (Oh, all right. It's named after this guy, a Senator from Missouri.) Cedar Rapids itself was named after the rapids of the Cedar River (which I guess at one point had red cedars growing along its banks? Are there still any of them around?) The Sac and Fox tribes were original settlers of the area as well.

So all that knowledge acquired, let's break down the Blue Diagonal flag:

The gold diamond in the center obviously represents May's Island, where the government offices are located. (Cedar Rapids shares the distinction with Paris as being one of two cities in the world to have their governmental offices on an Island.)

Which brings us to the tree: I can't draw. Obviously, in a perfect world, this would be The Tree of Five Seasons, since Cedar Rapids is the city of Five Seasons. But, like I said, I can't draw, so you'll have to settle for a stylized tree with five sides to it, each representing one of the Five Seasons that Cedar Rapids is all about. (You shouldn't ignore the red cedar though: the flag of Lebanon technically has a green cedar, that doesn't look anything like a red cedar, but if you don't want to go with the actual tree of Five Seasons, a red cedar with five branches would tie back into both the city's name as well as it's history. Which would be kind of cool, I think.)

So, that's my first crack at making a new flag for Cedar Rapids. Whatever process they choose to use to design their new flag, though- I'm just happy that they are. Flags have been incredibly potent symbols throughout history and still are today. A new flag to promote some civic pride is never a bad thing in my book. (Now I just have to poke Iowa City again and see if I can get answer on the status of our flag as well.)