Eating Shit On Ice, Or What I Learned From Walking To Work Yesterday 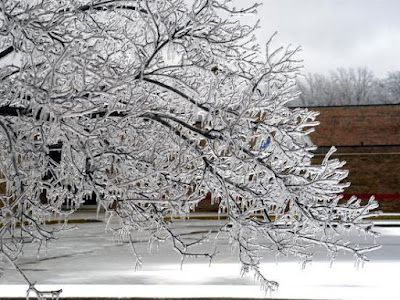 So, our saga began on Tuesday afternoon. Our white ol'reliable Subaru Outback began flashing check engine lights and doing strange things as the Missus was coming back from lunch with a friend. She gave the local mechanic we use a call and managed to get the Outback over there with no problem, but then, a few hours later, we got the call with the big ugly news.

(I should note here: we both freely admit we're terrible car owners. This experience has made us both vow to be better car owners going forward, as our tendency of 'drive the car until lights began to come on and weird, fucked up shit starts to happen' has bitten us in the ass before. We also think we can learn to be car people- and that's not really going all that well, as the sad, blue shell of our Mini Cooper can attest too.)

Upshot of the big ugly news: no car until Friday and a monetary amount that made us both grimace in pain, but was thankfully workable and should secure a major repair to keep the car running for a couple of more years. That meant my plan for getting to work yesterday was going by foot.

I honestly don't mind walking to work. Yes, it means I have to get all my shit ready the night before. And yes, I do have to get up fifteen minutes earlier than I normally do and I'm at an age where sleep is something I'm learning to appreciate- even fifteen extra minutes of it. But I really don't mind it at all- it's an easy walk. I can put my bluetooth headphones on and throw on some music or a podcast and it's a decent, easy workout to kick off my day.

Normally, it's quite pleasant.  Normally, I sort of look forward to it. Normally.

Yesterday, however was not a normal day. Around 2am or so, freezing rain began coating the roads, sidewalks and pretty much all solid surfaces across the area. By the time I was ready to begin my journey around 5am, literally everything was covered. Everything. Ice spikes on my shoes would have been great. But I had no ice spikes, so gingerly made my out into the ice covered world.

I was almost to the bottom of our hill when I ate shit on the ice for the first time. I was driving to navigate a driveway, feet started sliding down toward Court Street. Gravity took hold. Down I went.

You don't really consider the angles of driveways until you have to gingerly make your way across them. You also don't consider how wide they are. Every driveway feels like an ocean when your world is an icerink and you don't have ice skates on. But, I made my way along Court Street and didn't fall. I wasn't moving all that fast, but I was moving. And then I got to 7th Avenue and realized that I had to make a decision.

From 7th Avenue, Court Street angles down to where it meets Muscatine Ave and my experience navigating fairly sedate and mild inclines and driveways that seemed like oceans suggested to me that a steeper hill was probably a very bad idea. So a change of direction was in order.

Over on 7th to College.

This driveway wasn't nicely paved. It was gravelly with divots and bumps, rises and falls. It was nearly my undoing, but after an awkward moment of panic, I made it across. I was leaping across sidewalks to the relative safety of the grass now, like a gazelle in a carhart jacket with two overladen bags slung across it's shoulder. College Street was better, for a given value of better but finally, at last, I crested the hill and found myself at the corner of Muscatine and College.

Filled with, 'Fuck This' energy, I called work. They greeted me with a mixture of amusement and horror that I was actually attempting to get in on time, wondering why I hadn't recieved the news that they were telling Day Shift to wait to come in until weather conditions improved. School had been cancelled as I was making my way up the hill. The wife had checked in, worried about my fate in the icy hellscape of the dark and abandoned streets. The Sarge was even more blunt, "Can you just go home?"

No. I was past the point of no return now. I wasn't about to pick my way backwards the way I had come. The only way was forward, so I waited for a car to lumber by me and made my way across Muscatine and up the hill to Summit Street.

The second time I totally ate shit on the ice was, weirdly enough at the back entrance to the apartment building I had lived it in college. 1012 E Burlington Street, Apartment 12. I had driven and been driven out of this entrance multiple times. This had been my preferred way to get to class and as I was trying to get across to the relative safety of grass, another car was backing out and heading my way. I got far enough across that I could reach out for what I hoped would be a stable anchor of a root of some kind. Turns out, it snapped off in my hands and down I went.

I made my way to safety and was comforted by the fact that the car in question and turned upward onto Summit Street and was going absolutely nowhere. Walking had proven to be no picnic, but I was getting closer.

The long gentle slope of College Street was very familiar to me. This was my route to and from class for a good chunk of college. Unlike Burlington Street, one block over, it's inclines were gentle, it's angles managable. Burlington Street would have been a very bad idea and having eaten shit on the ice twice, I wasn't in a hurry to add to my tally- or worse, injure something other than my dignity or pride. (I learned when I got into work that wait times for EMS were something on the order of an hour- a combination of a massive clusterfuck of a backlog and the topography of where you were located.) So, College Street it was and immediately, I confronted a new challenge:

Yes, there were apartment complexes along College Street and presumably due to a combination of wider parking lots and a proliferation of SUVs purchased by Mommy and Daddy so Little Junior could invade Czechoslovakia on the weekends, the driveways were no longer merely oceans. They were Pacific Oceans and I was forced to occasionally stop and consider all the angles of my approach.

Happily, time was ticking on as I picked my way down College Street I started to see plows hitting the main roads and everything accelerated from there. Soon I was downtown and the safety of grass was gone and the angles of driveways were replaced by the angles of sidewalks as my primary concern. Unwilling to chance a ramped sidewalk, I picked my way around the corner and walked up College Street from Gilbert to the Library and then, finally, I could see my destination.

The bricks of the Ped Mall were glorious. I don't know why-- one would have assumed that bricks would have been more treacherous with ice- but maybe the temperature was warming up a degree or two or maybe they had already hit them with the salt trucks, I don't know. But finally, I reached my destination and made it to work.

Was there a lesson to be learned here? Probably. I probably should have given up immediately and saved myself the trouble- and the bruises. Topography is important. So is geography. Also, I probably should have paid more attention in geometry class. But, some Motrin, a hot bath, some whiskey and a good night's sleep later, that was probably the most challenging commute I've ever had. I feel accomplished if still slightly bruised and you know what? It was kind of fun, in a weird sort of way.

I didn't hate it.