This Week In Vexillology #299

January 11, 2020
Y'all.  We're almost done with The Lost Archives...  I've got one more entry planned after this and then we will officially be moving into unknown territory and then we'll have to start getting really creative with this stuff.  So, what's on deck for today? A couple of state flags from down in Brazi- Santa Catarina and Rio De Janeiro. 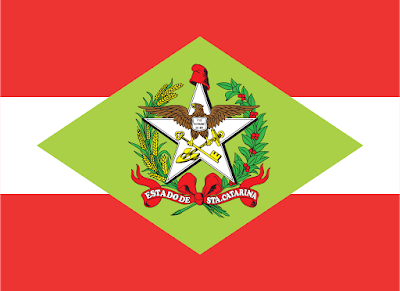 Located in southern Brazil, the state of Santa Catarina is almost the southernmost state in the country and to be honest, if you were trying to pick a state in Brazil to move to, Santa Catarina would probably be somewhere in your top ten or so. It's got the highest life expectancy, lowest infant mortality, lowest economic inequality and illiteracy in the whole country. It's one of the oldest states in Brazil as well and was separated from Sao Paulo all the way back in 1738. It's capital is the lovely sounding city of Florianopolis.

What about their flag? It was adopted officially in 1953, based on a design that was used back in 1889. The central shield is probably the busiest part of the flag: the branches stand for the coffee plant, the anchor stands for the ocean that borders the state and the key stands for the state's strategic position in the south of the country. The date on the central shield- November 17th, 1889 is the date of the adoption of the Republic regime and our old friend, the Phyrgian cap also stands for the Republican govenrment as well.

Next up, the flag of Rio de Janeiro: 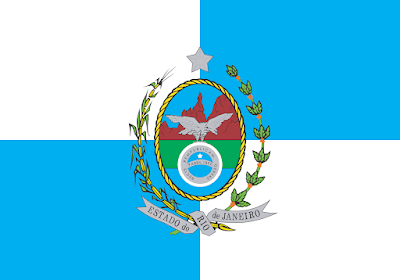 Adopted in 1975 when the state was combined with Guanabara to make a new state of Rio de Janeiro, the flag retained a lot of the old symbolism from the prior flag. The blue and white and traditional colors of Portugal with the coat of arts of the state set in the middle of the flag. The Coat of Arms has some excellent amounts of detail:

The eagle taking flight stands for strong, honest and just government which carries the hope and confidence to the most distant corners of the state. The shield which is sits atop as the date of April 9th, 1892 which stands for the promulgation of the first Constitution of the state. The motto of the state, 'Recte Rempublican Gerere' (Conduct the affairs of the public with righteousness) is also seen. The whole thing is supported by a stalk of sugar cane and a stalk of coffee, which the name of the state on the silver scrool and the the state of Delta cruis at the top, which represents the state of Rio in the national flag. (Also, TIL the stars in the Brazilian flag represent states! Don't think I knew that, which is weird.)

And that's Santa Catarina and Rio De Janeiro! Remember until next time, keep your flags flying- FREAK or otherwise!