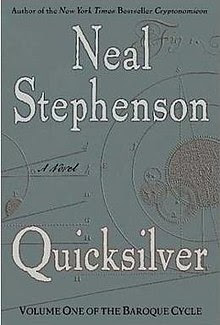 I can't tell you how long the parentals have had all three volumes of Neal Stephenson's The Baroque Cycle on their bookshelves. It's been years since I picked up Quicksilver and took a crack at actually finishing it- but post their move to the new house, I snagged all three volumes from them and sat down and took a swing at Quicksilver again and this time, I hit it right out of the park.

I was going to try and summarize it all but I was about a third of the way into it when a realization struck me: this is really kind of three books in one so it's...  hard to really summarize it in an effective way without getting way too verbose- but I'm going to give it a shot.

Book One, features Enoch Root coming to Massachusetts to get Daniel Waterhouse to importune him to come back to London to resolve a feud between Newton and Liebniz. The book then flashes back to the 1670s and recounts how Daniel met Newton, went to college together, were separated by plague and how Daniel got involved in the Royal Society and met Leibniz and eventually encourages Newton to present his ideas for calculus to the Royal Society.

Book Two tells the story of Jack Shaftoe (Half-Cocked Jack Shaftoe) and Eliza, who meet at the Siege of Vienna in 1683, where the Sultan's soldiers are about to put Eliza (a courtesan who resides in his harem) to death. He rescues her, steals a horse and some ostrich feathers the two travel across Bohemia and into the Palatinate and decide to winter at a hot spring until spring when they can get the best prices for the ostrich feathers. They too meet Dr. Leibniz and accompany him to a silver mine in the Harz Mountains. Eventually they get to Amsterdam, where Eliza becomes embroiled in commodities trading and Jack goes to Paris to finally sell Turk and the Ostrich feathers. He becomes a messenger for bankers between Paris and Marseille but gets captured by nobles and makes a dashing escape. Eliza is persuaded by the French ambassador to go to Versailles and give him information about the French court-- William of Orange, however, turns Eliza to use as a double agent. Jack goes off on a slaving trip and gets captured and turned into a galley slave by pirates.

The final book flips back to Daniel Waterhouse who by 1685 has become a courtier in the court of Charles II and secretary of the Royal Society. When Charles II dies and James II succeeds him, all the characters (with the exception of Jack for obvious reasons) come to realize that a Revolution is imminent and all of them play a part in it in one way or another. The book ends with Daniel expecting to die due to kidney stones, but his friends prefer keeping him alive (and the fact this is a trilogy probably helps with that as well) so they drug him and take him to Hospital where Robert Hooke begins an operation to remove his kidney stones.

Overall: There is so much to unpack in this book, I hardly know where to start. From the science-y point of view, it's obvious that Waterhouse, Newton and his contemporaries are on the verge of laying the foundation of modern science as we know it. I haven't dug too deeply into the accuracy of Quicksilver, but am willing to bet it's probably pretty good. But the strand of the story that spoke the most to me are the events that the characters find themselves caught up in. I know about The Glorious Revolution of 1688, but Stephenson manages to capture what you could easily imagine as the uncertainty and malestrom of European power politics of the era. France is expansionist. Germany is fractured. England is in a nervous Restoration- remembering all too well the wars of religion and strife they've suffered through and William of Orange is presented as a canny political operator that sees an opportunity to increase his own political power.

Stephenson makes the history of it all come vividly alive and threads the narrative with humor and adventure that places the readers smack dab in the political machinations of European politics of the day. Even the science-y parts of it all are interesting: thinking about what it would be like to alive when people are figuring out the things that we barely think about now. The staggering discoveries- the fact that this period of time produced so many great thinkers and minds is incredible as well.